The latest Mercedes A-Class premium hatch is one of the most tech-laden cars on sale, of any size

The Mercedes A-Class has always been a compact hatch with one major selling point – that three-pointed star on the nose. But while its predecessors all lacked a little substance behind the badge, this latest generation is a genuine contender for class honours. Step inside and it blows its rivals away – the interior design and quality is wonderful, and the infotainment system is quite possibly the best on the market at any price.

Some rivals are more fun to drive and several are more comfortable, but the A-Class leads the class both in terms of refinement and efficiency. Invest in one of the higher grade infotainment set-ups, and the A-Class is one of the most high-tech hatches money can buy.

The latest Mercedes A-Class is the fourth generation of Mercedes’ smallest car. While the first two examples took on a mini-MPV design direction (with clever, if not particularly desirable, results), the most recent pair have gone for a more conventional five-door hatchback shape in order to compete directly with the BMW 1 Series and Audi A3.

The A-Class is an important model for Mercedes: in reality, it’s the brand’s biggest-seller, especially when taking into account the fact that official figures for the next most popular, the C-Class, roll saloon, estate, coupe and cabriolet numbers into one grand total. 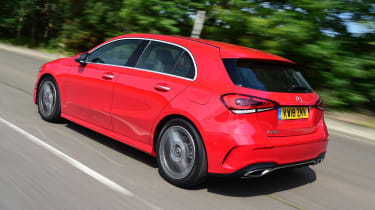 The A-Class is available as a five-door hatchback and four-door saloon in the UK. As with the third-generation model, spin-offs from the same platform are available - including the four-door coupe CLA and GLA mini-SUV).

There are seven trim levels for buyers of the hatchback to choose from. The SE (not available with the saloon body) kicks off the range with 16-inch alloy wheels, air conditioning, heated half ‘Artico’ artificial leather/half fabric seats and a pair of seven-inch digital screens – one for the dials and another for the infotainment setup.

AMG Line versions add the usual sporty touches to the exterior trim and inside the cabin, while there's also the AMG Line Executive, Premium and Premium Plus variants that offer further luxury items and safety kit.

There's also the A 250 e that gets the turbocharged 1.3-litre petrol engine, mated to a 15.6kWh battery and a 75kW electric motor. Total system output jumps from 158bhp to a more serious 215bhp.

A more spritely AMG A 35 is available in hatchback or saloon form and uses a new 2.0-litre turbocharged petrol four-cylinder, producing 302bhp and 400Nm of torque. Hot hatch fans will love the manic AMG A 45 S, featuring the world's most powerful four-cylinder engine - a bespoke turbocharged 2.0-litre unit with 415bhp.

For an alternative review of the latest Mercedes A-Class Hatchback visit our sister site carbuyer.co.uk 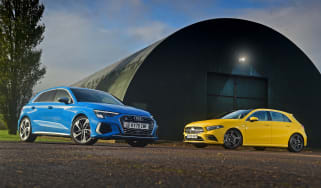 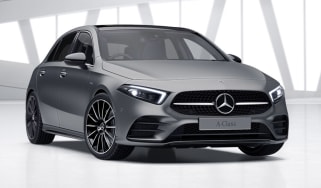 Two new trim-levels have been launched for the Mercedes A-Class hatchback, both of which come with a more generous level of standard equipment
Audi A3 vs Mercedes A-Class 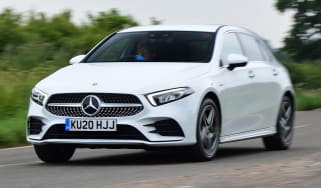 Does the plug-in Mercedes A 250 e have more going for it than claimed economy of over 250mpg and low emissions?
New Mercedes A 220 d 2020 review 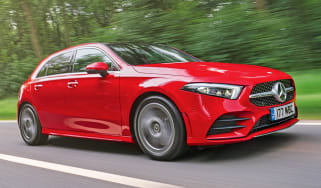 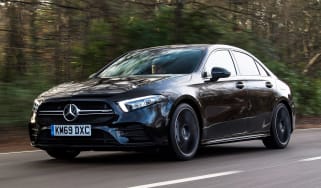 Can the Mercedes-AMG A 35 saloon offer the same thrills as the hatchback, but with added practicality
BMW 1 Series vs Mercedes A-Class vs Volkswagen Golf 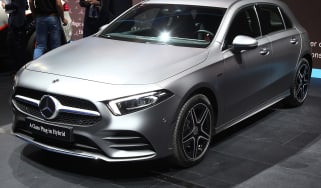 Mercedes has unveiled a pair of new plug-in hybrid vehicles, with a claimed all-electric range of around 40 miles
New 2019 Mercedes-AMG A 45 S to cost from £50,570 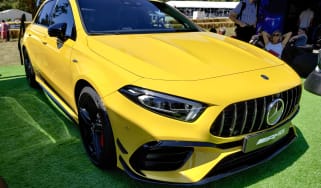 The Mercedes-AMG A 45 S superhatch boasts a turbocharged 2.0-litre engine with 415bhp, and it's on sale in the UK now
New Mercedes A-Class Saloon 2019 review 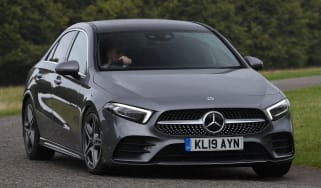 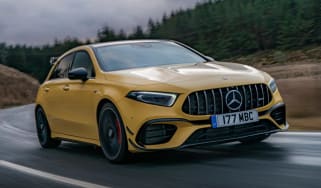 Does the red-hot Mercedes-AMG A 45 S hatchback make the grade on British tarmac?
Mercedes A 200 AMG Line: long-term test review 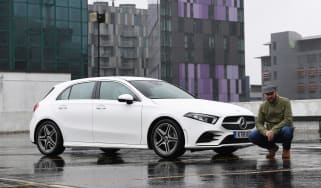 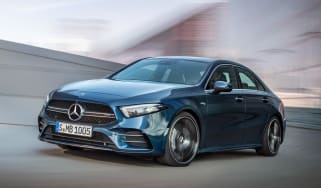 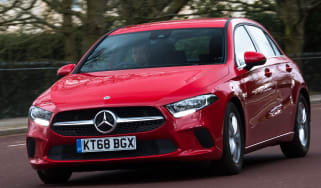 The Mercedes A 180 SE is the cheapest way to buy a new Mercedes, but is a bog-standard A-Class something worth considering?
New 2019 Mercedes CLA Shooting Brake uncovered at Geneva 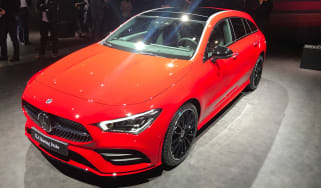 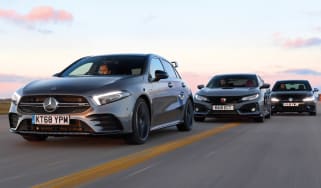 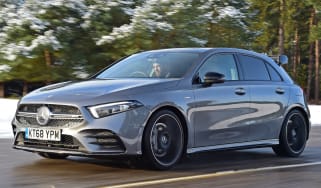 The new Mercedes-AMG A 35 is the most potent A-Class for now, boasting 302bhp and 400Nm of torque
Mercedes A-Class range expanded with A 200 d and A 220 d diesels 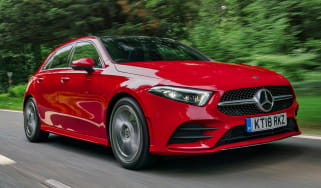 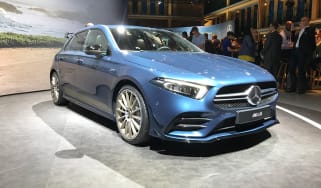 The new Mercedes-AMG A 35 will sit below the A 45 in the A-Class line-up, rivalling the Audi S3 and VW Golf R
Mercedes A-Class scores five stars in latest NCAP tests 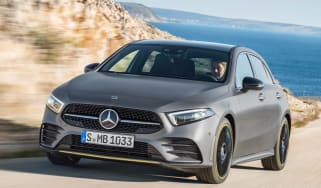 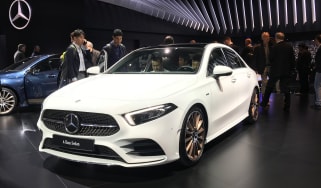 Prices for the 2019 Mercedes A-Class Saloon have been announced, with deliveries beginning early next year
New Mercedes A 250 AMG Line 2018 review 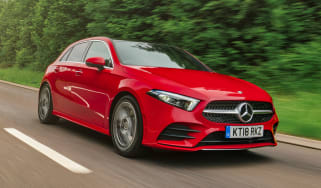 The hottest Mercedes A-Class until the Mercedes-AMG versions arrive, the A 250 has pace enough for most
Skip to HeaderSkip to Content