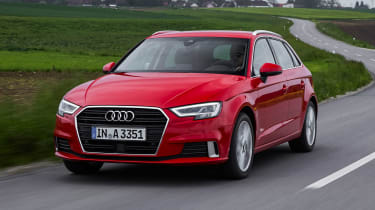 The new Audi A3 provides more of the same refinement and classy feel that the previous model offered, but with a few key upgrades to make it even more tempting. The new 1.0-litre engine is a fine choice, being both economical and good to drive, while the new Virtual Cockpit is an excellent tech option to have on a family hatch. The A3 is not as good to drive as rivals, though, and can get pricey if you start adding optional extras.

Audi has updated its A3 range, with a few tweaks to the looks, engine range and more in-car tech. The new design is very subtle, being limited to a wider grille, narrower lights and a wider-looking rear end, but the most important changes are underneath the bodywork.

These start with this new 1.0-litre three-cylinder engine, which is a welcome addition to the range: it feels really well suited to the A3 and could even tempt you away from the popular 1.6-litre TDI diesel model. Prices haven’t been decided for the UK yet, but this newcomer is likely to be quite a bit cheaper than an equivalent A3 diesel. 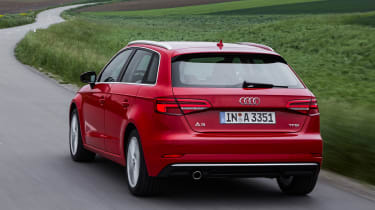 It might not sound like 113bhp and 200Nm of torque is much in the VW Golf-sized A3, but performance is actually better than the 1.6 diesel’s, with the car going from 0-62mph in 9.7 seconds. It has plenty of mid-range punch and while it feels a bit lacking at higher speeds, it doesn’t feel underpowered.

This 1.0-litre petrol A3 is much more refined than the diesel model, a quality that works together with the A3’s calm character to produce a very grown-up driving experience. When you push it a bit harder, the petrol unit emits a pleasant thrum and with economy of 62.8mpg and a lower asking price, over a few years it could even match the diesel’s running costs. 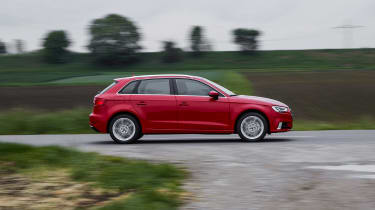 The three-cylinder unit is lighter too, weighing 88kg in total, which not only helps with economy and performance, but aids the handling as well. It’s keener to turn in than larger-engined models and although the steering is still lacking feel, this model is reasonably fun to drive. The ride was smooth on our drive too, we’ll just have to try it in the UK before we can give a definitive verdict.

The seven-speed automatic gearbox we tried offers smooth shifts and works well most of the time. When in manual mode. When you put your foot down harder, there is a bit of lag before it changes but this is less noticeable in the 1.0-litre model than in the higher-powered versions of the A3. 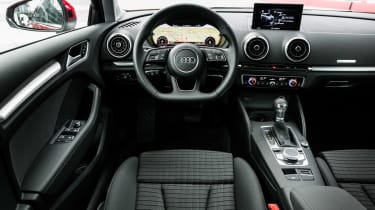 The new in-car tech is one of the highlights of the facelifted A3, as the car now uses Audi’s Virtual Cockpit system. This puts everything that a traditional infotainment system would have on a central display screen on the instrument panel right in front of the driver. Even the sat-nav mapping can be displayed in between the digital dials beyond the steering wheel.

It’s an excellent system, and not only looks upmarket but is very useful as well. It’s part of a well-designed and classy-looking interior, one of the A3’s strong points. It’s one of the most upmarket-feeling cabins in its class and is like one of Audi’s larger models both to sit in and to drive. 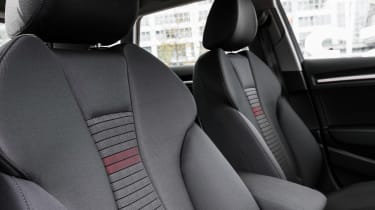 The new A3 is just as practical as ever too, especially in the Sportback (five-door) body style. There’s lots of room front and back, and while the boot isn’t the biggest in the family hatchback class, it’s still on the larger side and is comparable to rivals like the BMW 1 Series and VW Golf. There’s some new safety kit available too, including a rear cross-traffic warning, pre-emptive safety braking and traffic jam assist.

You get Xenon lights and a retractable seven-inch display screen as standard on the new A3, and another neat tech feature is the built-in SIM card. This gives you internet access as well as live traffic updates and other features in the car for three years. It can be extended by your dealer if you own the car longer than that, too.

The updated A3 is more of the same, then: it features loads of tech, an upmarket cabin and efficient engines. There’s more engine options this time, though, and the new 1.0-litre could be a great choice - but the Audi is still less involving to drive than rivals like the BMW 1 Series.