The new entry-level Audi A3 is aggressively priced, but is it better than the top-selling VW Golf SE? 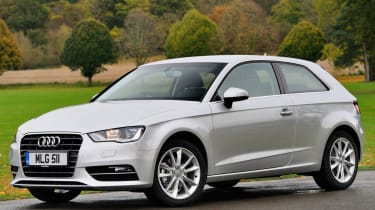 The Audi A3 SE is the entry-level model, but it still represents the best blend of equipment and economy in the range. It’s a decent looker, too, both inside and out. However, the more practical five-door models of the A3 and Golf are better bets. And, as the five-door A3s cost £620 more than three-doors, versus a £655 price gap between three and five-door Golfs, the Audi closes to just £275 more than its Golf equivalent – so the smart money is on the A3 Sportback SE.

The price difference between a three-door Audi A3 1.6 TDI in SE spec and the equivalent new Volkswagen Golf is just £310 in favour of the VW. So, with such a small jump to own a car with an Audi badge on its bonnet and boot, has the new A3 usurped the Golf as the family hatchback of choice?

On paper, as well as the price advantage, the Golf is slightly better in terms of standard kit. It’s also more practical. At 2,637mm, the Golf has a 36mm longer wheelbase, giving a little extra knee room in the rear, and the Audi’s 365-litre boot is beaten by the Golf’s 380-litre load space.

But the Audi fights back as soon as you see it. The A3 is a sober-looking car, but the mixture of crisp, simple creases – like the one which runs from the tip of the headlights back along the car’s flanks – and modern-looking details like its smart head and tail-lights makes it look like a car from the class above the Golf.

The minimalist theme continues inside, with a striking, uncluttered dash design built to Audi’s typically high standards from some very solid-feeling materials.

Audi’s take on the 5.8-inch colour touchscreen is smart, too. It swooshes up from the dash top, and is controlled by the MMI wheel and buttons set behind the gearlever.

Not only are these easier to use than the Golf’s touchscreen, you don’t end up with mucky finger marks all over the screen. However, as the A3 also features an info display in between the dials, which displays everything the touchscreen does, you do find yourself switching the touchscreen off, and letting it drop back down into the dash.

On the road, the 1.6-litre TDI engine is economical, easily returning more than 50mpg on our 400-mile drive. However, while it is refined, it’s a little on the slow side and doesn’t match the more responsive 1.4-litre petrol engine that’s worth a look if you don’t drive high mileages.

The A3’s ride is just the right side of firm, particularly if you specify larger alloys than the 16-inch rims fitted as standard, but that makes it marginally sharper in bends than the Golf, too.

Inside, the front seats tip and slide forward with the pull of a handle, but squeezing into the rear seats is still a little tricky. Once in, the rear seats are also a bit short on head and legroom for taller passengers, although the cup-holders built into each side of the seatbase are a nice touch.