The new Audi Q3 Sportback has arrived, but it costs around £3k more than a standard Q3. Is it worth the extra cash? 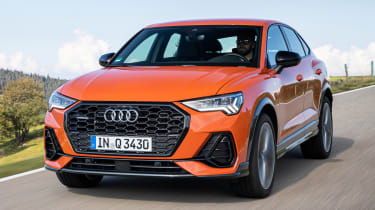 From an objective point of view, it’s hard to justify the price premium that the Sportback carries over the standard Q3. However, the extra style it adds – without significantly compromising practicality – means that this is one of the most convincing coupe SUVs yet. It’s just a shame that, like the regular Q3, the largely positive driving experience is let down by the disappointing automatic gearbox. The forthcoming mild-hybrid petrol might just be the pick of the range.

The Audi Q3 was one of the first posh small SUVs, designed to offer the premium appeal of the larger Q5 and Q7 in a smaller package. But while the German firm was quick off the mark, it took them a little longer to cotton-on to the exploding coupe-SUV craze.

Better late than never, Audi has launched this: the Q3 Sportback. The maker hopes it’ll tempt buyers away from the BMW X2, but while that car gets a complete styling overhaul relative to the X1 on which it’s based, the Sportback stays slightly more faithful to the look of the regular Q3. From the front, the pair are pretty much identical, in fact.

In profile, the changes are more substantial, however. The roofline falls away much sooner than on the Q3 SUV, which results in a more pinched rear quarter light and an extended rear spoiler. The shoulder line drops from just above door handles in order to give a more planted appearance. 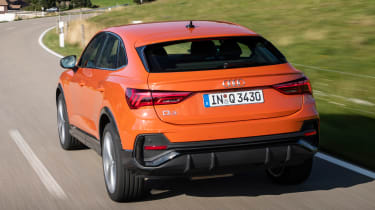 Smaller rear window aside, the tail end of the Sportback can be differentiated from the rest of the Q3 range courtesy of a reprofiled boot lid and a unique rear bumper with a large mock diffuser. The overall look isn’t as clumsy as other coupe SUVs, but it’s arguably not as distinctive as the X2.

The good news is that the more rakish look doesn’t do too much to compromise practicality. While the Sportback is 29mm lower than the Q3 SUV, it’s also 16mm longer, resulting in a slightly extended boot floor. So even though their load bays are slightly different shapes, the pair both offer 530 litres to play with. Granted, if you fold the seats down the Sportback’s overall space is smaller (1,400 litres versus 1,525) but that’s unlikely to be a deal breaker for many buyers.

Moving into the back seats, and the distance between the base of the back seat and the roof is 25mm less than in the Q3 SUV. However, Sportback’s reclined seat backs mean that as long as you’re six foot or under, you’ll not be nudging your head against the ceiling. Legroom, like in the standard Q3, is above average for the class, while a sliding rear bench allows for up to 130mm of movement if more storage space is required. 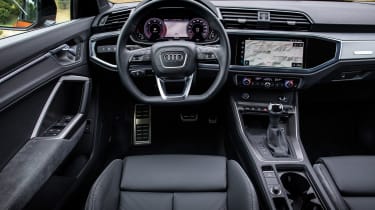 It’s standard Q3 fare up front. That means there’s a smartly laid out dash with a bright, slick touchscreen infotainment system. There are some oddly cheap looking bits, like the wide panel of cheap plastic which houses just the start button and volume control, however.

Out on the road, the Q3 feels pretty much identical to the standard car. In other words, it handles fairly adeptly – with front-wheel-drive models feeling noticeably more agile than the quattro variants. The steering is light and lacks feedback, though, meaning a BMW X2 is more fun.

The Q3 is more comfortable, however, even though it comes with sports suspension as standard. It can still feel a little bouncy when fitted with the biggest 20-inch wheels, but this can be cured with the adaptive dampers. Standard on the top-spec Vorsprung trim, these round off bumps impressively in Comfort mode – adding firmness and banishing the bounce in Dynamic.

The Q3 Sportback will come with a choice of one petrol and two diesel engines at launch. The single petrol unit is the 45 TFSI: a 2.0-litre turbocharged unit producing 227bhp. Two 2.0-litre diesels, the 35 and 40 TDI, develop 148bhp and 187bhp respectively.

We sampled the 45 petrol and the 40 diesel. Both offer smooth, linear performance and gather speed at a deceptive rate. Both, however, are let down by their seven-speed dual-clutch gearboxes. Ask for more power, and there’s a delay before the system makes up its mind, and in usual driving it’s reluctant to kick down at all – to the point where it can leave the diesel engine off-boost and with little to no forward motion. It’s very frustrating when the rest of the driving experience is so accomplished.

A 1.5-litre petrol unit paired with a 48-volt mild-hybrid system (when combined with an auto gearbox; the manual does without the hybrid gubbins), will join the line-up in October, and we were granted a quick spin of a pre-production model. This will enable fuel-saving measures like engine-off coasting, faster engagement of the stop-start system and an energy recovery set-up. 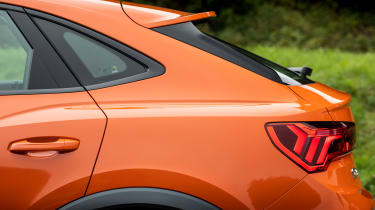 Our drive was too short to draw any conclusions about fuel consumption, but the system was as slick in its operations as it is in larger-engined applications. Audi predicts this will be the most popular engine in the Q3 Sportback range, and to us it seems like it’ll be the best, too.

So the Sportback drives much the same as the standard Q3, is arguably better looking, and it’s barely any less practical than a car that’s among the most spacious in its class anyway. So is this one of the few coupe-based SUVs that actually makes sense?

Well, almost. Because for a car that’s so similar to the Q3 in so many ways, you’ll still need to fork out somewhere in the region of an extra £3,000 over and above what you’d pay for the standard SUV. Should you go for the 45 TFSI in top spec Vorsprung trim, that means you’ll need to fork out a whopping £48,765 for the privilege.