We drive the new Q3 Sportback in Britain for the first time, but is it an SUV niche too far for Audi? 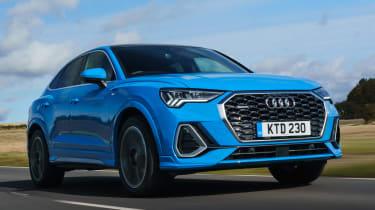 Many buyers will find the Audi Q3 Sportback’s extra dose of style hard to resist, but it’s impossible to ignore this model’s shortcomings. The boot is a good size, true, and average-sized adults will be fine inside. But it’s expensive, the ride is firm, and this entry-level engine feels strained and slightly sluggish. As before, we expect the forthcoming mild-hybrid petrol will be a better fit.

Audi's ever-expanding ‘Q’ range now comprises five distinct models – and that’s before you throw the all-electric e-tron into the fray. Five quickly becomes six, or seven if you include this: the all-new Q3 Sportback.

We first drove the sleeker Q3 on European roads back in August, declaring it an appealing alternative to the standard SUV. Adding a dose of extra style without much compromise in practicality, it proved one of the most convincing coupe-styled SUVs to date.

Now we’re driving the car in entry-level diesel form on UK roads, to see if the same statements ring true. The 2.0-litre TDI is a known quantity, and has been used across the wider VW Group for years – as is the familiar MQB platform, which underpins everything from the humble Golf to the sleeker Audi TT.

In profile, the aesthetic changes Audi has made to this latest Q3 Sportback are obvious. From the front it looks similar to the standard car, but from the A-pillar back things are decidedly different; the sloping roofline and rakish rear are key to this, as is the reprofiled shoulder line, which drops away over the rear wheels.

The Sportback is 16mm longer than the Q3 on which it is based, meaning that roofline doesn’t affect practicality quite as much as you might imagine. The quoted 530-litre load bay is a little deceptive, however, as it’s only measured to the belt line – fill the siblings to the brim and you may find the coupe a little less practical than the standard SUV. 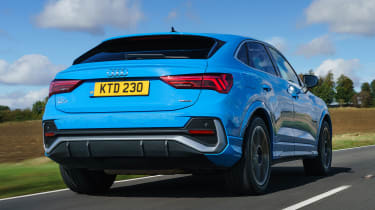 It’d be unfair to call the Q3 cramped in the back, but adults over six-foot tall may struggle to get comfortable. It feels a bit darker in the rear than some rivals, partly due to the taller window line, but mainly because of the S line’s black headlining. We wonder whether a Sport model may be better served in this regard.

On the road, you’d be hard pushed to tell the conventional Q3 and this Sportback apart. It’s agile enough for a car of this type, and while the steering is light, even front-wheel drive models like ours demonstrate plentiful grip on greasy roads.

Our early European drive came courtesy of the more powerful 40 TDI diesel, and while it’s ostensibly just a tuned version of the 35 TDI we’re driving here, the lower output of this model was noticeable. The cheaper car felt a bit sluggish, and the gearbox wasn’t the most responsive; the lack of steering wheel paddles means taking control isn’t all that simple, either. It’s a shame we weren’t able to try a Q3 Sportback with the manual transmission.

The ride is just the wrong side of firm, too. The standard-fit Sport suspension doesn’t crash over potholes, but it ensures the body stays rigid and causes a discomforting bouncing sensation around town. It’s better the faster you go, however, smoothing out at motorway speeds.

It’s relatively hushed at 70mph; even on 19-inch wheels the Q3 manages to supress all but the worst road noise. The sleek shape limits wind noise, too, slipping through the air with little disturbance.

But while the 35 TDI might lack punch, it’s likely to be fairly cheap to run. Audi says it’ll do between around 45mpg on the new WLTP cycle, while strong residuals place it ahead of the BMW X2 when it comes to retained value after three years or 60,000 miles. A new Range Rover Evoque is stronger still in this department, while the X2 offers lower CO2 emissions and, as such, may prove a better value company car. 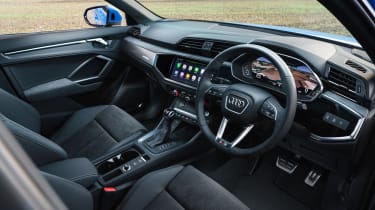 Elsewhere, the Audi excels when it comes to cabin comfort – the luxurious interior sets a high benchmark in this class. An X2 may offer a more clinical layout, but the Q3’s mixture of upmarket materials and ergonomic design make it feel a step ahead in most areas. Every version gets Audi’s pioneering Virtual Cockpit dials and touchscreen MMI infotainment system, as well as a three-year subscription to Audi Connect.