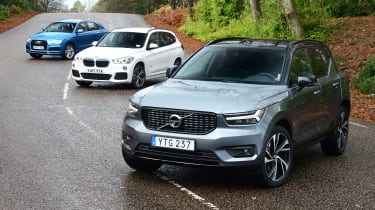 Following the launch of its XC90 and XC60 models, Volvo’s new SUV blitz continues in 2018 with the arrival of the smaller XC40 in the UK. Auto Express got early access to a pre-production prototype to put the baby XC through its paces against two of its closest rivals, the BMW X1 and Audi Q3.

This class is one of the most hotly contested in the market, but Volvo has form because its seven-seat XC90 SUV is a past winner of our Car of the Year crown back in 2015, while the mid-size XC60 took the Best Premium SUV title at our annual New Car Awards last year. So can this smaller XC40 complete a hat-trick for the Swedish brand?

The D4 R-Design model we’re testing pitches the Volvo squarely in the firing line of BMW’s X1 xDrive20d in M Sport trim. And while the Audi Q3 is showing its age, with an all-new replacement due later in the year, the car is still a popular choice. We test it in 2.0 TDI S line specification to match its rivals.

All three SUVs feature four-wheel drive and automatic gearboxes, and offer a similar level of kit. There’s only £845 between their list prices, too, so will this be reflected in the brands’ PCP deals and will the result be marginal? Or will we have a runaway victor in the class? Read on to find out. 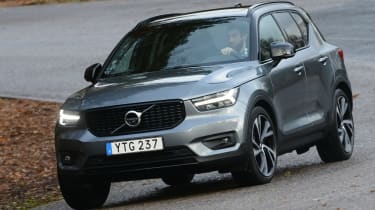 Volvo might be a little late to the compact premium SUV party, trailing its two German rivals here by more than half a decade, but it’s on a roll with its 4x4 line-up. So can this smaller XC40 – tested here in £34,655 D4 AWD R-Design trim – maintain the momentum? 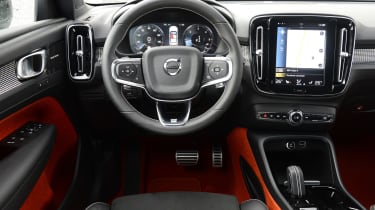 Despite identical power and torque, the XC40 trailed the X1 in our performance tests, while it also lagged behind the less powerful Q3. The deficit to the BMW in the sprint from 0-60mph was six tenths; it took 8.2 seconds. Part of that is down to the Volvo’s more sluggish transmission, which is slower to change, but at least the box is smooth when cruising. Yet it’s also due to the heavier, 1,698kg kerbweight.

The combination meant that the XC40’s in-gear acceleration wasn’t as quick as its rivals, but it wasn’t desperately slow, either, taking 6.0 seconds between 50 and 70mph in fifth gear, which was just three tenths behind the Audi. Given the Volvo turns lower revs at 70mph, it’s no surprise. This helps motorway refinement, although put your foot down in town and the D4 engine does drone. It’s not a leader in any one area dynamically, but the XC40 is a good all-rounder that’s competent in the areas where you want it.

Testers’ notes: “Unlike on the X1 and Q3, adaptive dampers are not an option on the XC40. This is a shame, because they’d soften the Volvo off that little bit more and improve the car’s ride and refinement.” 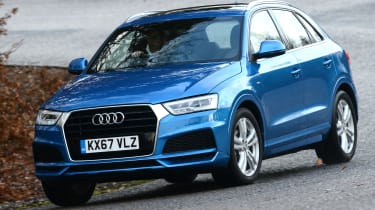 The Audi Q3 has been an incredibly successful product and captured the essence of what a small, premium SUV should be when it launched in 2011. However, six years on, is this still true of the £35,500 2.0 TDI quattro 184 S tronic S line Edition model that we’re testing here?

There’s no ignoring the Q3’s age, because even on the move it feels dated. The ride isn’t as forgiving as the X1’s or even the XC40’s, while the body rolls more in corners so the Audi doesn’t feel all that composed, even though it offers adequate grip.

There is plenty of traction, though, thanks to the firm’s famous quattro all-wheel-drive system. Together with the snappy changes from the seven-speed dual-clutch box in Dynamic mode, the Q3 was actually the quickest car on test from 0-60mph, clocking a time of just 7.3 seconds. 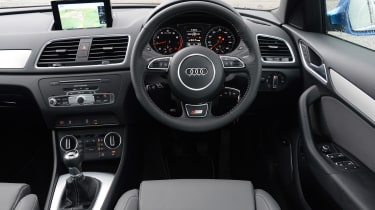 Part of that is due to shorter gearing, so the Audi can zip through its ratios faster, which also helped the car’s in-gear performance. It was pretty much on par with the XC40 here with a few minor differences, despite giving away 20Nm of torque to its rivals.

However, you know you’re working the engine hard because refinement and isolation aren’t as good as in the Q3’s competitors. It’s dronier and rattlier, and while the gearbox is smooth most of the time, it does lurch aggressively when manoeuvring.

The steering weight is good and it’s quick enough to respond, with a suspension set-up that can deal with these inputs, but combined with the lumpier ride, the car lacks the refinement of the class leaders.

Testers’ notes: “Given the Q3’s age, our deals opposite are just a guide. We’d recommend driving a hard bargain with your local Audi dealer if you’re keen to get behind the wheel, because some good discounts will be available.” 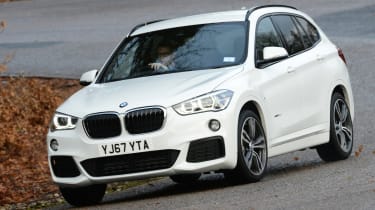 The second-generation BMW X1 revamped the model from an also-ran in this sector to a class leader when it went on sale in 2015. Given how competitive this area of the market is, it’s no surprise that the X1 xDrive20d M Sport that we’re testing here comes in close to the XC40 at £35,470; but is it worth this small amount extra?

After only a few miles behind the wheel of the X1 it’s clear that this is the most driver-focused model of the trio. It feels more like a conventional car than an SUV because you sit lower, but this means it also feels sportier. Combined with weightier steering than in the Volvo and less roll, it offers more grip and corners harder, making it the more involving choice.

There are different drive modes, just like in the XC40, and with the adaptive dampers connected to the toggle switch that selects these different settings, the X1 feels alert in Sport mode. Yet the ride is never as crashy as the Volvo’s, even in the stiffer setting. 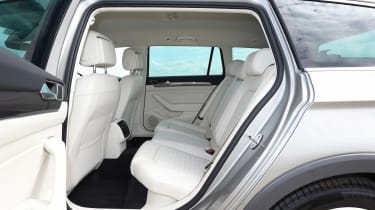 In Comfort mode and on the same size wheels as the XC40, the BMW is more absorbent, filtering out suspension movements with more finesse and keeping things more level. This means it’s more comfortable around town and on the motorway, while the engine isn’t quite as noisy, either.

At our test track the car was slightly faster than the XC40, beating it by six tenths from 0-60mph, with a time of 7.6 seconds. It was also a few tenths faster from 30 to 50mph in the lower gears, while this advantage increased between 50 and 70mph in the higher gears. The engine is more refined and the gearbox a little snappier to change in manual mode as well, tying in with the extra focus placed on the driver. There’s nothing to split the transmissions or the traction the four-wheel-drive systems offer when cruising, though, because both are smooth.

Testers’ notes: “Given these small SUVs will often be used as family cars, having no standard autonomous braking could count against the X1 when that feature and lots of other safety tech are fitted as standard on the XC40.” 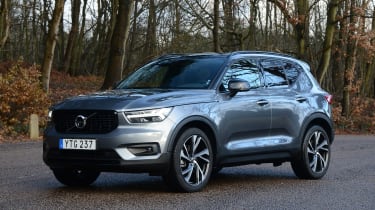 Given the level of standard technology, the XC40 slots in straight at the top of the class. It’s good enough to drive, if not as advanced or refined as the X1, but it betters the BMW here thanks to its more attractive PCP deal, and mixes this with comparable day-to-day practicality, acceptable performance and decent economy. The fact it’s a fresher, smarter, higher-tech SUV cements the victory. 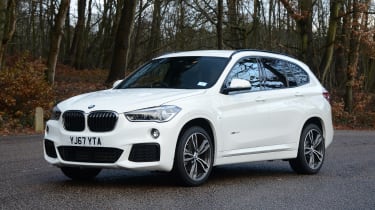 Keen drivers should stick with the X1 because the chassis has the broadest spread of ability for dynamics and comfort. The powertrain is good and the boot is big, but a gulf between BMW’s monthly prices and Volvo’s counts in this class. While the X1’s infotainment is great, it’s an option, plus this compact family SUV doesn’t offer as much standard safety tech. 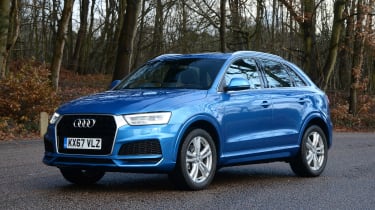 The Q3 feels tired in this company, and the lack of safety tech and connectivity hurts it now it’s in its twilight years. It’s desperate for a refresh with an all-new model arriving later this year (below), and while performance is decent, the Audi isn’t as efficient on paper (although it returned good mpg with us). Poor packaging also means it’s just not isn’t as practical as its rivals here. 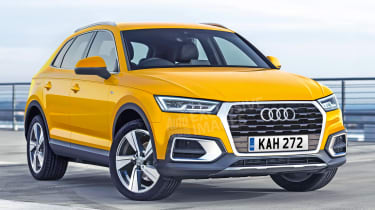 The next Q3, as previewed by our exclusive image, will switch to the MQB platform. There’ll be a 187bhp 2.0 TDI, but petrol turbos and plug-in hybrids are also likely to feature.