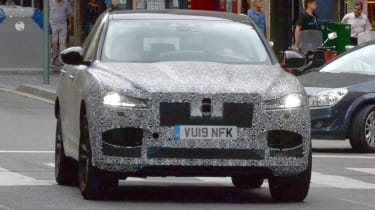 Jaguar looks set to launch a revised version of its mid-size F-Pace SUV, with a minor cosmetic overhaul, a new hybrid engine and a substantial interior technology update. The new model will go on sale in the UK next year, with prices starting from around £38,000.

Like the recently facelifted Jaguar XE, exterior revisions are limited to the easily swapped panels. As such, this heavily camouflaged F-Pace mule features a pair of slimmer “J-Blade” LED headlights, a reprofiled front bumper with larger air intakes, a new radiator grille, sleeker side skirts and a redesigned rear diffuser with fresh exhaust outlets.

Given the F-Pace shares its platform with the XE, we expect the SUV will adopt the saloon’s pared-back engine range. Jaguar’s 247bhp and 296bhp turbocharged 2.0-litre four-cylinder petrol engines will likely persist across the update, along with its 178bhp 2.0-litre turbo diesel. All three engines will be offered with four-wheel drive and an eight-speed automatic gearbox.

Plug-in hybrid technology will also appear for the first time on the new F-Pace, combining a 1.5-litre three-cylinder petrol engine and an electric motor. It’s a system that will also find its way into the new XE saloon and the revised Land Rover Discovery Sport. 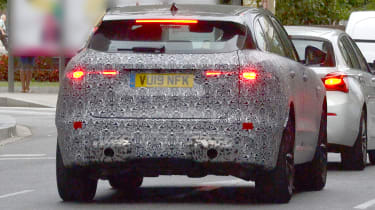 Specifications for the new PHEV powertrain are yet to be confirmed but, given it’ll be competing with the new BMW 330e in the saloon market, we expect it’ll produce around 250bhp and offer WLTP-certified economy figures of more than 100mpg.

We expect the facelifted F-Pace’s interior will receive the same redesign as the XE’s which, in turn, is borrowed from the I-Pace. As such, it’ll feature a new steering wheel, a revised centre console and Jaguar’s latest Touch Pro Duo infotainment system, which comprises a 10.2-inch central screen and a new lower screen for the car’s heater controls.

The F-Pace should also adopt Jaguar’s simplified trim level system, as used by the E-Pace, the I-Pace and the new XE. Just two basic models are likely to be offered, with buyers given the choice of an entry-level “Core” model and a sportier “R-Dynamic” variant. Both versions will then be available with a choice of three option packs, badged S, SE and HSE.

What do you make of the facelifted Jaguar F-Pace? Let us know in the comments section below… 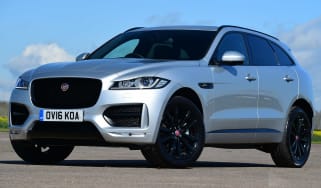 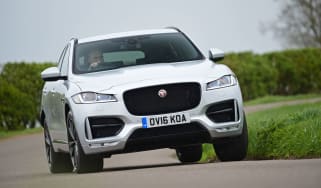