The facelifted version of the Jaguar XE compact exec has arrived, with prices starting from £33,195

Jaguar is hoping it can right the XE’s wrongs with a new facelifted version for 2019. The updated Jaguar XE receives tweaks to its exterior, upgrades to its technology arsenal and a substantially overhauled interior. Priced from just under £34,000 it goes on sale this week.

The XE’s four-year old design doesn’t get any metalwork changes but a series of tiny tweaks to give a fresher appearance. The front gets a reshaped grille that stands slightly prouder than before and it sits within a completely new bumper with larger air intakes. If the headlights look a little sleeker that’s because they’re 12mm slimmer than the old car’s, and every XE now gets LED ‘J-blade’ day-running lights and headlights as standard.

“This facelift is all about giving the XE more a purposeful look,” says Paven Patel, design manager, Jaguar Exteriors. “We tried to make the car look lower and wider and to give it more of a sweptback appearance – and the headlights are key to that.” 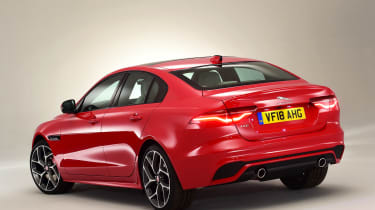 The flanks remain unchanged but at the rear the XE gets your typical mid-life refresh with a new bumper and lights. “On the old XE the rear looked pretty much the same if you had an entry-level model or the top spec car. For this XE we’ve given the core model and the sporty version slightly different lower bumpers to make each more distinctive,” says Patel. The old XE’s roundel-shaped LEDs have been replaced with our new ‘Chicane’ design and scrolling indicators are now standard; “It’s little tricks like this that not only tidy up the rear end, but also make the car appear wider and more planted.”

It’s on the inside where the real changes lie, however, as the XE’s new interior could be mistaken for a brand new model’s. While the general structure is the same as before, there has been a gargantuan leap in terms of material quality and attention to detail. 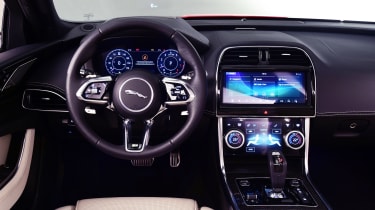 The centre console has been redesigned too, but this time the XE takes some F-Type features with the trigger-style gearlever and driving modes switch from the sports car. There’s also a wireless charging pad for the first time in an XE and, availably optionally, is the new Range Rover Evoque’s clever rear view mirror that uses a camera positioned on the roof to beam a clear, un-obscured rear-facing image onto the mirror.

The doors have been reshaped too with a simpler design for the window, mirror and memory seat buttons; there are larger door bins and new grab handles, and the old car’s scratchy plastics have been covered in soft-touch plastic. The doors and seats can now be ordered in an array of colours including black, cream, pale grey, red and tan, and top spec XEs get Windsor leather seats – the same you’d find in the XJ limo.

“We’ve a lot of time on this interior,” says Alister Whelan, creative director, Jaguar Interiors. “If we’re being honest we focused too much on making the previous XE fantastic to drive and that had a detriment effect on the interior. This time around we’ve still got a wonderful handling car but we’ve been able to spend time on making the interior right.”

Not only has the material quality been improved but there are also a handful of design touches added. There are new carbon fibre and wood trims for the dash and doors, rear metal trim for the centre console and dash and aluminium speaker grilles for the Meridian sound system. Look closely and there are ‘Est. 1935, Coventry’ tags on the seats and the wireless charging pad is monogrammed with a lozenge pattern. “That’s a modern take on the Jaguar logo of the 1950s, and it’s repeated in the front headlamps as well.”

The new XE has ditched the old car’s SE, Prestige, R-Sport and Portfolio trim structure and now mirrors the E-Pace and I-Pace’s range. There’s the regular (‘core’ in Jaguar-speak) and R-Dynamic (which gets sportier styling) and within those two models there are S, SE and HSE packs. The basic ‘S’ comes with 18-inch wheels, electric leather seats, LED headlights and tail-lights, front and rear parking sensors and lane keep assist. 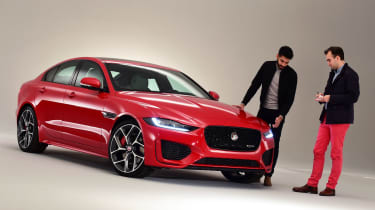 Despite the revised range and overhauled look inside and out, Jaguar isn’t launching the XE with a new engine range but instead it’s paired it back for now. There are two 2.0-litre petrols with 247bhp and 296bhp (called ‘P250’ and ‘P300’ respectively) and a D180 with a 178bhp 2.0-litre diesel – all come with an eight-speed automatic as standard.

The D180 is now RDE2-compliant (meaning it won’t attract a four per cent supplement to BiK) but the expected range of mild hybrid petrols are at least a year away. Worse still the highly anticipated BMW 330e-rivaling plug-in hybrid XE – using a 1.5-litre, three-cylinder petrol and an electric motor – is also unlikely to launch this year.

Jaguar is hoping the new car will stimulate XE sales which, in the UK at least, have nearly halved since the car launched in 2015. Prices kick off at £33,915.

What do you think of the facelifted Jaguar XE? Let us know your thoughts below...