The all-new Jeep Wrangler is on sale now, featuring two new engines and a starting price of £44,865 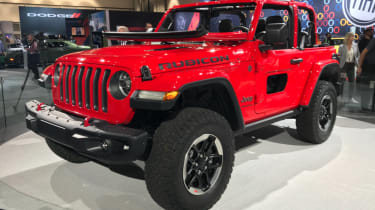 Full prices and specifications for the fourth-generation Jeep Wrangler have been announced. The updated range features two new engines, a slight styling lift and a fresh interior, with prices starting from £44,865.

UK versions of the Wrangler will be sold with a choice of two engines; a 2.0-litre turbocharged petrol and a 2.2-litre MultiJet II turbocharged diesel. Both powertrains have the same base price and both can only be specced with an eight-speed automatic gearbox.

The Wrangler’s 2.0-litre turbocharged petrol four-cylinder produces 268bhp and 400Nm of torque, while the 2.2-litre MultiJet turbo diesel provides 197bhp and 450Nm of torque. Both engines feed their power through a range of four-wheel-drive systems and a two-speed transfer case, giving the choice of either low-range (for rock crawling) or high-range (for higher speeds). 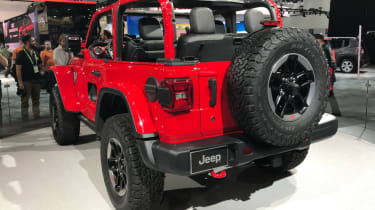 Base-model Wrangler “Saharas” get the most basic “Command-Trac” system. Mid-range and top-spec “Overland” and “Rubicon” models, both of which are priced from £46,865, get more tech with tougher front and rear axles, electronically-disconnectable anti-roll bars and beefier locking differentials. Limited-slip differentials can also be specced as an optional extra.

The Jeep Wrangler can wade in water 30 inches deep and tow up to 1,588kg, and dedicated off-road drivers can opt for knobbly 17-inch tyres. The Wrangler is also available as a four-door model, with a premium of £1,500 over the base price of the two-door cars.

Exterior styling updates remain minimal, with the Wrangler remaining faithful to its original 1987 design. However, even though the general shape looks dated, the new Wrangler should have contemporary road manners thanks to its extensive use of aluminium, which contributes to a lower kerb weight. LED headlights and fog lights also freshen its face.

The new Wrangler is available with a choice of roofs; including a manual soft-top, an electric soft-top and a removable hard-top. Like on the previous model, the front windscreen can still be folded flat over the bonnet and the doors remain removable.

Inside, Jeep has attempted to improve the Wrangler’s quality, adding a digital gauge cluster, a multi-function steering wheel, an Alpine stereo system and an 8.4-inch infotainment system with support for Apple CarPlay and Android Auto as standard. Buyers can also opt for either cloth or leather upholstery and vinyl door-cards.

Now read our review of the new Jeep Wrangler. Let us know your thoughts in the comments section below…