Four-door Mercedes-AMG GT 63 will cost from £121,350, with first deliveries expected in the spring

Prices for the all-new Mercedes-AMG GT 4-Door have been annoucned, with the coupe-styled super saloon starting from £121,350. It's on sale now, with first deliveries expected in the spring of 2019.

That figure buys you an AMG GT 63 4MATIC+, while the S-badged GT 63 S is priced from £135,550. Range-topping First Edition models start from £148,950 and come dressed in Graphite Grey magno paint, 21-inch forged alloy wheels and an aero package. 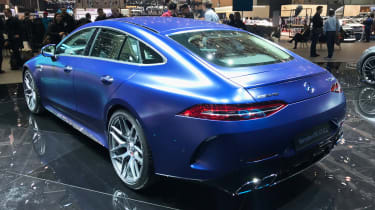 Step up to the AMG GT 63 S and you'll add AMG's Dynamic Plus package, which includes a rear differential lock. You also get bigger brakes with yellow callipers, different wheels and an AMG Performance steering wheel.

As usual, the Edition 1 throws in many of the most desirable options as standard. In addition to the aggressive aero package, these cars also get special seats with contrast stitching, and black Dinamica headlining. The Edition 1 also boasts the otherwise optional (£3,600) Premium Plus package, adding heated and cooled massage seats, a head-up display and soft close doors.

Those after even more kit can spec the £3,695 Rear Luxury Lounge package, which switches the rear bench for two individual seats. It also adds a touchscreen in the centre console, wireless phone charging and heated and cooled cupholders.

The GT 4-Door's introduction extends the AMG GT family to three models alongside the two-door Coupe and Roadster. The sibling resemblance from the front is striking, with the new model featuring the same long, low bonnet, vertically-slatted grille and three-part lower air intake.

Blistered wheelarches fill out the side profile, while the roofline slopes dramatically to the tailgate, which again looks very similar to the two-door version. There's either a pop-up rear wing or a larger fixed wing on higher performance versions. Quad tailpipes housed in a rear diffuser also feature. 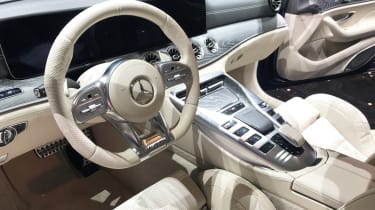 The entry-level GT 43 model, which features the in-line six-cylinder engine from the updated S-Class limo, will not be sold in the UK.

Both V8 variants put their power through a nine-speed automatic transmission and permanent four-wheel drive with a variable torque split. Initial economy figures claim both versions are capable of 25mpg and emit 256g/km of CO2.

Inside, you'll find all the usual up-market touches, such as the LED backlighting and individual air vents – taken from the firm’s most luxurious models. The large centre console, with a central gearshift flanked by eight large switches, is a trademark of the AMG GT models.

Mercedes has moved the drive mode select function to buttons mounted on the steering wheel, alongside the loud exhaust mode button and a Porsche-like quick-response ‘S+’ performance toggle switch. Trim options include everything from quilted cream leather to a carbon and Alcantara theme.

Welcome to our Geneva Motor Show hub page, scroll down for all our Geneva content...
MBUX: Mercedes’ infotainment technology explained