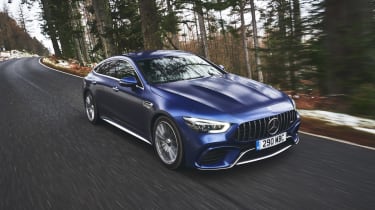 It might share a model name with AMG’s Porsche 911-rivalling GT sports car, but the four-door AMG GT is quite a different animal. Its E-Class underpinnings – albeit heavily reworked – mean it lacks some of the exoticism of the two-door, but it’s hard to complain about the performance. The AMG GT 4-Door Coupe is wickedly fast, as rumbustious as an AMG should be, and hugely impressive to drive.

The four-door saloon format opens up a new realm of practicality, although if that’s your bag the AMG E63 is roomier all round – especially in estate guise. But unlike the E63, the AMG GT 4-Door Coupe genuinely handles like a sports car, which is an impressive feat indeed. Running costs? Not brilliant, but understandable in a big luxury car which knocks on the door of a 200mph maximum speed.

The Mercedes-AMG GT was first revealed as a two-door sport coupe rival to the Porsche 911 in 2014 – and the AMG brand’s second stand-alone model that wasn’t simply a hot-rodded version of something in the standard Mercedes-Benz catalogue. Its predecessor was the SLS AMG, but the GT dropped the gullwing doors featured on the SLS in favour of regular doors. The GT 4-Door Coupe gets another pair, but the differences between the two and four-door GTs are far more fundamental than that. The sportier two-door has a bespoke spaceframe aluminium chassis, whereas the GT 4-door rides on a platform derived from the Mercedes-Benz E-Class and CLS saloons. There’s only one Mercedes-AMG 4-Door Coupe bodystyle too, whereas the regular GT is available as a coupe or roadster.

Under the bonnet, the GT 4-Door Coupe offers the same twin-turbo 4.0 V8 as the two-door, but AMG also offers the option of a smaller straight-six engine. All versions feature a 9-speed automatic and four-wheel drive though, and the expected UK entry model will be the GT 53 4Matic+, which comes with a mild-hybrid drivetrain – the initial UK launch line-up being limited to V8 power.

V8 enthusiasts can choose from GT 63 and flagship GT 63 S models, and it’s the signature AMG V8 powerplant that provides clear water between the GT 4-Door and Merc’s own CLS saloon/coupe which is a similar four-door coupe concept, but only available with six-cylinder power – the range-topping AMG-tweaked CLS 53 version providing the engine for the AMG GT 53 4-Door Coupe.

The GT 4-Door does share a wheelbase with the CLS though, which is a bit of a giveaway to its heritage, although overall the GT is longer, lower and wider than the cheaper car.

In top GT 63 S spec, the new model is the fastest saloon car in the Mercedes portfolio, and as befits a sporting flagship is laden with all the same safety kit as a top of the range S-Class. It competes directly with four-door performance cars like the Porsche Panamera and the BMW 6 Series Gran Coupe, as well as rivals from arguably more exotic marques like the Aston Martin Rapide and Maserati Quattroporte.

If you need more space to go with your monstrous AMG power, it's worth remembering that the Mercedes-AMG E 63 S Estate is priced nearly £40,000 cheaper than the top-spec GT 4-Door – and still comes complete with over 600bhp. 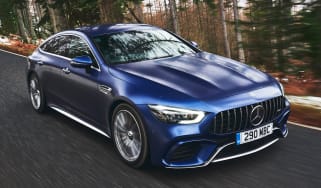 Can the Mercedes-AMG GT 4-door blend sports-car performance with saloon practicality? We drive it to find out...
Visit/mercedes/amg-gt-4-door/104065/mercedes-amg-gt-4-door-coupe-ride-review 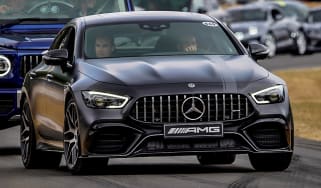