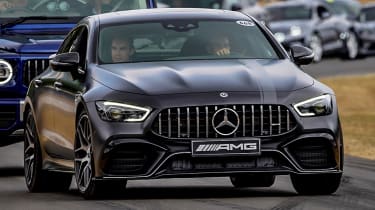 Some may think this is simply an AMG version of the Mercedes CLS thanks to some similar styling cues, but it’s far more than that. As the name suggests it’s a four-door version of the bonkers AMG GT supercar. From the passenger seat it’s clear AMG have managed to carry over the GT’s surefooted handling and sense of occasion while adding a nice dose of practicality - it’s rather spacious and has a tailgate. This ride has really whetted our appetite.

It goes without saying that the over the past 25 years the Goodwood Festival of Speed has grown in stature. And one feature that has really taken off is the chance to see the very latest and most exciting new metal on the road for the very first time.

Less than 12 hours after being the first in the world to drive McLaren’s new 600LT supercar, we were being strapped in the passenger seat of the new Mercedes-AMG GT 4-Door Coupe alongside AMG factory driver Adam Christodoulou for a run up the Goodwood hill – the first global media to be in the sleek new Mercedes-AMG before we get behind the wheel ourselves in September.

Nudging out of the Supercar Paddock and down to the start line the big AMG attracts as many as admiring glances as the most exotic supercar. A quick donut by Christodoulou at the bottom of the drive and it’s up to the line – all eyes and smartphones once again on us. 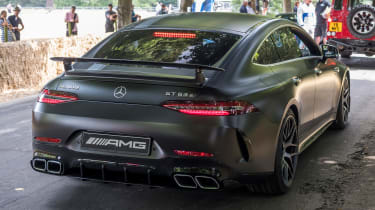 We’re in the range-topping version of next year’s 4-Door Coupe – the GT S. That means a whopping 630bhp is being pummeled through the 4Matic four-wheel drive system – it translates to frankly astonishing acceleration pace.

Before we know it, it’s turn one and then turn two and past Goodwood House. The bi-turbo 4.0-litre V8 is bellowing, angrily snapping through the gears. Under the bridge and into Molecomb – Christodoulou is very late on the brakes, but the GT 4dr hauls itself to a slower speed, jinks left and it’s back on the loud pedal.

Acceleration in third gear is mightily impressive and you really wouldn’t think you were in a two-tonne four-door coupe. The reaction from the engine, the noise and the overall body control is more akin to a two-door sportscar. It’s really only the Mercedes CLS-like dashboard being the giveaway that this is a more luxurious model, but the sharply raked centre console – which is home to a variety of controls – is very AMG.

We burst out of the trees for a second before plunging back into them and then across the chequered finish line. It’s a tantalising first taste of what’s bound to be one 2018’s star cars.