Can the Mercedes-AMG GT 4-door blend sports-car performance with saloon practicality? We drive it to find out... 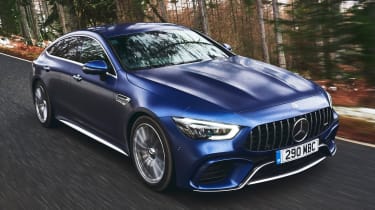 The new GT 4-door represents exactly what we’ve come to expect from Mercedes-AMG. While it won’t be to all tastes, it’s hugely fast and beautifully built, filling yet another niche we never knew existed. It’s sharper to drive than an equivalent AMG E 63 S, and while you do have to pay for the privilege, it’ll no doubt be a hugely impressive and desirable car to own.

While two-door sports cars aren’t often criticised for their poor practicality, Mercedes thinks there’s a market for those who want to take their cake and eat it. The result is this: the Mercedes-AMG GT 4-door.

This is a car that, in theory, takes everything we love about the standard Mercedes-AMG GT Coupe, while adding usability and space so that your family can come along for the ride. It rivals cars like the Aston Martin Rapide S and forthcoming BMW 8 Series Gran Coupe, but unlike those cars, the 4-door separates itself by sitting on a different platform to its conventional GT sibling.

Under that super swoopy body lies the architecture that underpins the latest Mercedes E-Class. It’s used for everything from the E 220 d saloon, right up to the Mercedes-AMG E 63 S Estate. It gets even more bewildering when you realise there’s already an E-Class-based four-door coupe in the shape of the Mercedes CLS. 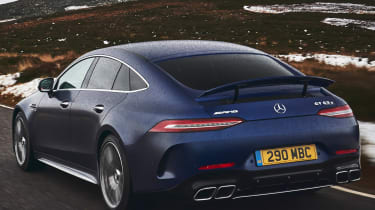 However, rather too cleverly, the spiciest CLS only comes as a six-cylinder ‘53’ version and not a V8-engined ‘63’ or ‘63 S’ – so Mercedes has engineered some clear air between the CLS 53 and the GT 4-door. Whether you agree with Mercedes’ ambitions to fill every conceivable niche, you can’t escape the fact the GT 4-door is a deeply desirable product.

No matter which model you go for, they both get AMG’s nine-speed automatic gearbox, four-wheel steering and four-wheel drive. Power is sent to the rear wheels in normal driving, with drive only sent to the fronts for added traction. The Dynamic Select drive modes are boosted by AMG Dynamics, which continuously monitors and adjusts the suspension, four-wheel steering, and the engine’s responsiveness; the higher you cycle through the modes the more aggressive the car becomes. Like in an E 63 S, the Race setting is the most belligerent, with the option to switch off the ESP and select the two-wheel drive ‘Drift Mode’ as and when your mood dictates.

There’s a wonderful burbling growl under light throttle, yet when you prod the accelerator properly you’re confronted by an earth-shattering roar. For the most part the twin-turbo V8 has a laid back character, but that turns into a relentless surge when you open it up. The S gets to 62mph in just 3.2 seconds, while the non-S model covers the same sprint in 3.4 seconds. For comparison, even the slower model is three-tenths of a second faster than a Mercedes-AMG GT C Coupe.

On the move, the GT 63 and GT 63 S feel pretty much identical, with a firm edge over potholes and bumps. Where the GT 4-door differs most from the AMG E-Class on which it is based, however, is through the bends. Here, that four-wheel steering gives a welcome dose of agility, and while the E-Class can feel a touch large, the 4-door feels more nimble. We’ve no doubt it’d feel keener to harry a Porsche Panamera Turbo on a twisting B-road.

Inside, you’re met by the usual Mercedes luxury-cum-techy feel with large display screens, high quality leathers and almost limitless ways to configure the ambient lighting. The GT 4-door uses the same dashboard as the E-Class, but gets a new centre console that’s similar in design to the two-door GT. It looks good, but the decision to ditch the E 63’s infotainment click wheel for a touchpad-style operation is ludicrous; it’s just too fiddly to use. 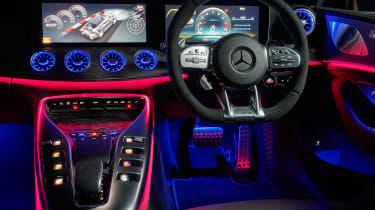 In the back and there’s less headroom than you’ll find in an E 63, too – but not unreasonably so. As standard both 4-door models get two separate seats in the rear, and for a little more you can upgrade things with a large centre console and touchscreen display, as well as heated and cooled cupholders. Those after a little extra practicality can switch in a conventional three-seat bench.

The question potential buyers will have to ask themselves, though, is whether the GT 63 S is worth the £38,000 premium over an E 63 S Estate.