How does the top-spec Mercedes-AMG GT C drop-top supercar perform as it hits British roads? 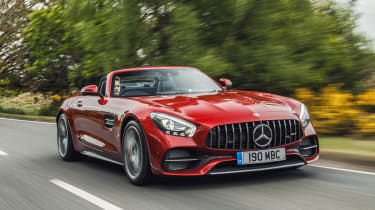 You’d be forgiven for thinking that the Mercedes-AMG GT C Roadster was all about the theatre. But the brand’s expert engineers have managed to perfectly execute all the pantomime and sense of occasion you’d expect from the company’s characterful twin-turbo V8 in a desirable, considered and well honed package. It’s great to drive, easy to live with and comes loaded with kit; the fact you can lift the lid and listen to that V8 howl simply adds to its appeal.

For decades, if you were after a high-performance super coupe, the default answer was the Porsche 911. However, in 2014 Mercedes entered the fray with the excellent AMG GT.

Then earlier this year, mimicking Porsche’s template once again, Mercedes lopped the roof off its two-door to create the AMG GT Roadster. The result is an achingly beautiful and long-bonneted drop-top that would challenge even the most exclusive six-figure supercars for outright kerb appeal.

We first drove the Roadster in the US in March, awarding it a coveted five-star verdict. But now we’ve got the more powerful £139,460 GT C back in Britain to see how it fares on our notoriously broken roads – a stern test for any car, especially a high-performance cabriolet. 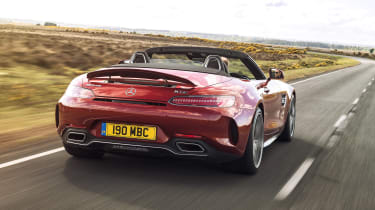 Two models are available from launch: an entry-level 469bhp GT Roadster, and this more expensive and altogether more ferocious 549bhp GT C version. Mercedes says the C sits part way between the standard cars and the flagship, coupe-only GT R, and it offers drivers who want more precision a less hardcore set-up than you’ll find on the brutal range-topper.

As well as an uprated version of the now-familiar 4.0-litre twin-turbo V8, the GT C also gets trick four-wheel steering, an electronic differential and adaptive AMG sports suspension. The track has been widened at the back, too, which should help tame that explosive rear-wheel-drive powertrain.

On the road the GT C feels expertly engineered. It’ll do 0-62mph in 3.7 seconds and hit nearly 200mph flat out – and while it certainly feels fast, it won’t bite your head off like AMGs of old. In fact, it’s a surprisingly accessible car – albeit one that’s devastatingly fast from point to point. 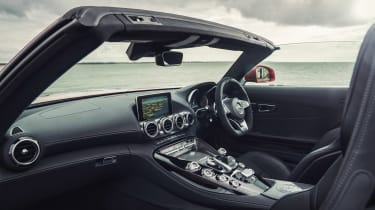 The steering is sharp and perfectly weighted, and with the usual Alcantara-clad AMG wheel in your hands, it’s simple to place and pleasingly direct. It feels suitably stiff without shaking you and your passenger to pieces, striking just the right balance between composure and comfort.

The AMG’s adaptive dampers can soften things up in Comfort mode, but even in its raciest settings it’s far from unbearable. It’ll certainly rival a Porsche 911 Cabriolet for dynamic prowess, and the Mercedes throws in an extra dose of noise and drama for good effect.

With the GT C in Sport mode and its AMG Performance exhaust engaged, the car will scream all the way to the red line and furiously pop and bang as you back off the throttle. In fact, there’s enough character on tap to give the bonkers Jaguar F-Type SVR a run for its money in a dark, Alpine tunnel.

But as with any modern-day Mercedes, the AMG GT can dial things back and cruise along the motorway with all the poise and refinement you’d expect from a car wearing the three-pointed star. At 70mph with the top down you needn’t even raise your voice, and there’s little buffeting with the windows raised. Put the canvas roof up and there isn’t much to differentiate this Roadster version from the already excellent Coupe. In the Comfort setting, the exhaust fades into the background, too.

The cabin is trimmed to Mercedes’ usual high standards, with leather and brushed aluminium throughout. The centre console is slightly button-heavy, and while the designers didn’t see fit to install the E-Class’s column-mounted shifter, the small steering wheel paddles allow you to swap cogs in an instant. The COMAND infotainment system is as easy to use as in any of the maker’s lesser models, too.

While practicality and efficiency are unlikely to matter to many buyers (most of whom will have several other cars in their garage), the GT C offers a decent boot with enough capacity for a long weekend away. Average economy of 24.8mpg means you’ll be stopping regularly for fuel, but you’re unlikely to ever tire of glancing back over your shoulder as you walk to pay the bill.