The Mercedes-AMG GT C aims to offer on-the-edge thrills in an everyday package, but how does it perform against the Porsche 911 Turbo? 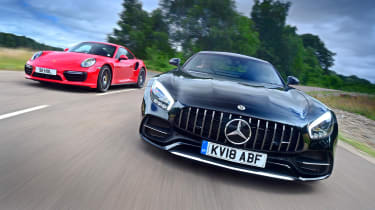 The Mercedes-AMG GT has evolved heavily over its short three-year lifespan. Development has continued from the standard model and the S to the hardcore, race-inspired GT R. And now there’s the GT C.

This sits more towards the centre of the range, between the S and the R – but does that mean it’s also the sweet spot? It takes some of the R’s make-up, including the rear-wheel steering, a wider track and an enlarged body to cover it, and has a new engine tune that means more power compared with the GT S.

However, performance cars like this come at a price. At £130,530, the GT C isn’t exactly a snip, while that figure also puts it perilously close to one of its main rivals, the Porsche 911 Turbo. Both use turbocharged engines and dual-clutch gearboxes and mix scintillating performance with GT credentials, but there are some distinct differences with the recipe, as we’ll find out as the two go head to head. 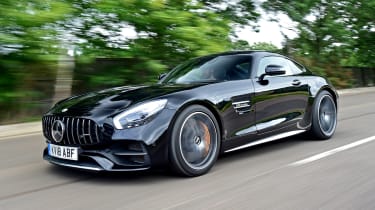 That exhaust gives the AMG a great soundtrack. The Porsche can’t match its raucous personality and it’s the engine that gives this car its incredible character. In Race mode the throttle response is sharp, with little turbo lag. It’s matched by an engine that growls before building to a rampant bark. Pull the gearshift paddle and the box slots home a new ratio with speed and aggression to reset the engine’s onslaught.

With 549bhp and 680Nm of torque from just 1,900rpm, performance is scintillating. The gearing is shorter than in the 911, so the car took 4.4 seconds to accelerate from 50 to 70mph in seventh, even if it was closer in the lower gears. Yet with only the rear wheels to lay that power down, even with launch control it wasn’t as fast as the Turbo from 0-60mph, taking 3.6 seconds. It’s still incredibly rapid, though. 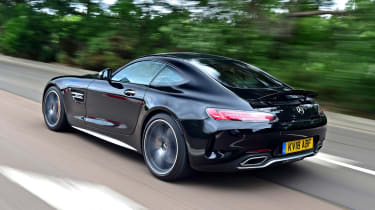 But it’s not all rosy for the GT C. As with other AMG GT models, the chassis set-up is firm. Even in the dampers’ Comfort mode the wheels thump over cats’ eyes and harsh ridges in the road surface. There are two firmer stages to choose from, and these help the car to corner even flatter, but are more effective on the track than the road. Comfort just about offers enough compliance for UK tarmac, although it still feels stiff and less settled than the 911.

The AMG’s steering is similarly aggressive. The quick set-up means that the long, low nose darts assertively towards an apex with only a little movement from off centre. It doesn’t offer the most feel, and combined with the sometimes slightly nervous-feeling chassis, the package doesn’t always gel. That rear-wheel steering is noticeable in slower corners, helping turn the car, but it has another benefit, as we’ll see.

There’s no denying the grip on offer is stunning, while traction is okay as long as you’re sensitive on the throttle. If you’re not, the AMG is engaging in its own way; turn the ESC off and with an electronically controlled limited-slip differential you can indulge in the front-engined rear-drive balance with some lurid slides if you’re feeling confident.

This all conspires to deliver a character and a car that’s different to anything else on sale.

Testers’ notes: “There are plenty of personalisation options with the AMG, from paint colours to carbon interior trim packages and different alloy wheels. Ceramic composite brakes are also available, at £5,995.” 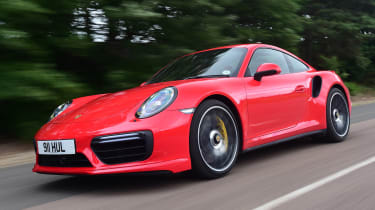 The Porsche 911 Turbo costs slightly less than the AMG GT C, at £129,987, but a difference of £543 is negligible in this market. While our pictures show a Turbo S, the standard Turbo is also a bit down on power, so does this hobble it against the AMG?

The Turbo’s engine produces 533bhp and a colossal 710Nm of torque. This latter figure is made slightly higher up than in the Mercedes, but thanks to the Porsche’s variable-geometry turbochargers, lag is basically non-existent.

Combined with four-wheel drive and launch control, the Turbo rocketed off the line and on to 60mph in an astonishing 2.8 seconds – eight tenths faster than the AMG. In Sport+ mode the gearshifts are even faster than the GT C’s, yet the PDK box is just as competent as an auto in the standard drive mode.

In gear the Porsche wasn’t quite as quick as the Mercedes, but on the road the 911 delivers devastating performance, because you can use more of it more of the time, thanks to the four-wheel-drive system. 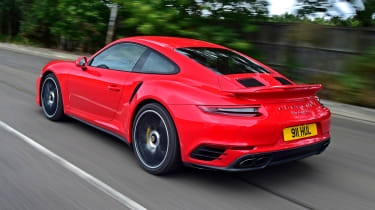 Its steering is weightier and offers more feedback. The 911’s nose feels more consistent, predictable and faithful than the AMG’s set-up, which can seem flighty and nervous at times. By contrast, turn in in the Porsche and it feels glued to a line. There’s huge traction and you can exploit the rear-engined layout to your advantage. But there’s also balance and delicacy. With space you can flick the 911 into slides and it’s far from an anodyne, all-wheel-drive experience. The 911 has a fun side that can be unlocked.

The motor has its own personality, but it’s not as overt or effervescent as the AMG’s V8. It whirrs and whooshes away behind you, yet revs hard like the Mercedes, even if the aural signature lets the Porsche down a little when the two models are back to back.

It puts clear distance into its competitor with the chassis. The damping feels more sophisticated and more controlled, giving a more stable platform to inspire more confidence. In the PDCC’s standard setting it’s mostly comfortable and compliant, but it still thumps over bumps a little; with the active roll engaged it feels flatter through faster bends and more rigidly controlled, but not as compliant.

Testers’ notes: “The brutality of the Turbo’s performance is what makes it so devastatingly effective. However, it balances this with comfort and genuine usability. It’s a brilliant all-round GT-cum-sports car.” 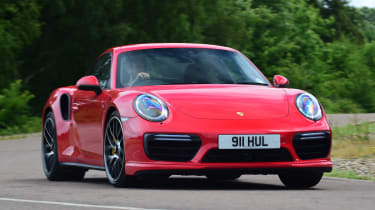 The 911 Turbo proves its dominance, blending performance, usability and handling. Its adjustability and balance are matched by huge traction, plus the damping is sweeter than the AMG’s. This makes it more comfortable, while it’s more refined, cheaper to run and slightly more practical. Better infotainment means the Porsche trumps the GT C in this encounter. 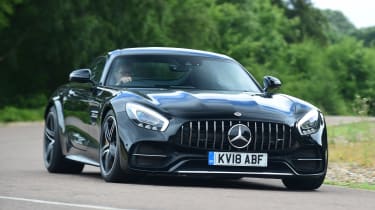 In the GT C, the AMG character we know and love is present. However, the chassis can’t match the 911’s delicacy. Compared with the Turbo it’s not as accessible, as nuanced nor as forgiving, so doesn’t deliver the same heights when it comes to driver reward, even if it does offer a double dollop of addictive V8 muscle and a delicious soundtrack. 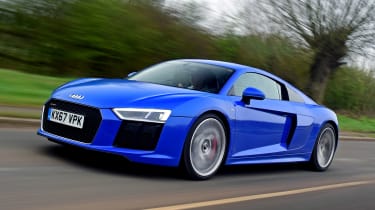 Unlike its rivals in this test, the R8 is powered by a naturally aspirated engine. The V10 defines the car, delivering a stunning soundtrack to match the looks, as well as simply staggering straight-line performance. 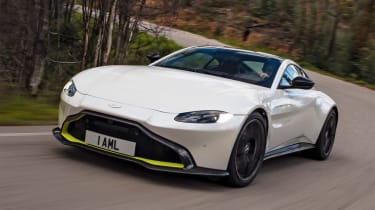 This is the British take on a brutish sports coupe. Aston Martin’s new Vantage uses the same engine block as the GT C, but it’s more approachable and serves up even sweeter balance from behind the wheel.