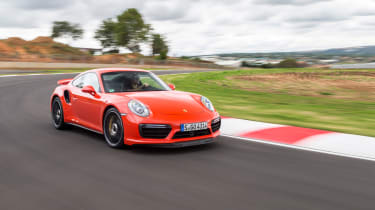 The 911 Turbo S is still a stupefyingly fast supercar. This next evolution of the breed ensures the future of Porsche’s high-performance luxury coupe is protected. With alternative offerings from Audi and McLaren, the choice at this level is tantalising – but if the idea of an iconic force-fed 911 resonates, the new Turbo S won’t disappoint.

The Porsche 911 Turbo could be in danger of losing its place atop the 'everyday supercar' list, with the release of a new Audi R8 and McLaren’s fantastic 570S. And now that even the standard 911 Carrera features a turbocharged engine, this flagship model’s position is in danger of being eroded from beneath.

We took the £145,773 top-spec Turbo S for a spin around the Kyalami circuit in South Africa, and got a brief taste on-road to see if it can still cut it next to ultra modern rivals.

Headline figures of 572bhp (20bhp more than before) and a colossal 750Nm of torque produced from 2,250rpm mean the 3.8-litre twin-turbo flat-six engine delivers the goods. It’s not as effervescent in the engine bay as its rivals, but wind up the 911’s motor and the sustained surge is intoxicating. 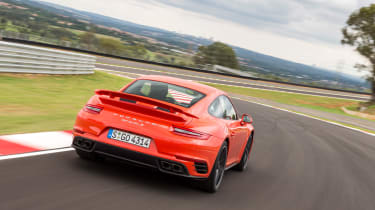 Officially, 0-62mph comes up in a conservative 2.9 seconds courtesy of launch control and a seven-speed PDK dual-clutch gearbox. But even Porsche’s engineers claim 2.6 seconds is the quickest they’ve seen in testing. It’ll romp on to a top speed of 205mph, with gear changes hardly affecting the engine’s rampant acceleration. Speed isn’t everything, though.

While torque isn’t actually increased over the outgoing Turbo S, Porsche has added a new Dynamic Boost feature. This keeps the throttle open and the turbos spinning even when you lift off the accelerator, improving response when you get back on the gas.

The difference from the driver’s seat is marginal compared to its predecessor, but the pick-up is eager, with minimal turbo lag and an instant hit of acceleration. However, those variable geometry turbos (the only petrol engine in the world to feature them) – helping to harness as much energy as possible – do affect the noise. Unlike the new Carrera, which still barks when fitted with the sports exhaust, the Turbo S has a more muted rasp as it howls its way round to the rev limiter. 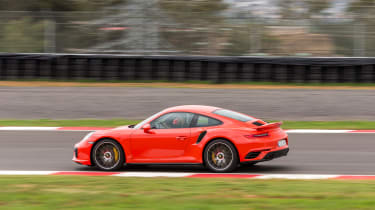 It’s devastatingly effective, though, matched by a reassuring chassis that finds an incredible amount of grip. Huge 20-inch wheels with wide tyres help, but Porsche has also revised the four-wheel drive system so it now distributes power to the corners that need it most, with even more accuracy.

As you’d expect, the range-topping Turbo S gets plenty of sophisticated chassis technology as standard, with Porsche Adaptive Suspension Management adjusting the dampers between Normal and Sport. Normal is better balanced for everyday driving, but in this setting the chassis feels like an evolution of what went before, with velvet suspension movement and solid body control.

Turn things up in Sport mode and you feel road imperfections more, but it ties down the 911’s 1,600kg chassis with greater composure – albeit at the expense of ride comfort – for higher speed, sportier driving. 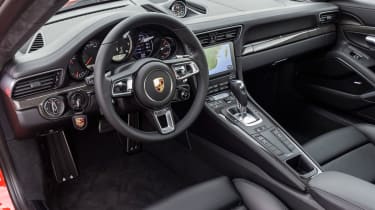 Roll is controlled with an iron fist if you prod the PDDC Porsche Dynamic Chassis Control button, which stops the Turbo S leaning as much in the bends. However, on the road it feels more fluid with the system disconnected, as marginally more lean helps load the tyres, keying them into the road harder.

With torque vectoring and rear-wheel steering carried over from the previous car, there’s plenty of agility and the Turbo S responds keenly to quick direction changes.

It’s helped by the narrower 360mm steering wheel, which makes a big difference, too. But this is still a big car, so throw it around and you can feel the Porsche’s masses subtly moving underneath you. This gives you options to choose your cornering line, while the huge stability makes deploying the Turbo S’s prodigious power simple. 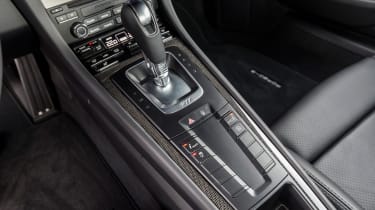 Porsche’s Sport Chrono pack is also standard, so a rotary dial mounted on the new wheel allows the driver to switch between driving modes, while a Sport Response button in the middle primes the powertrain for a maximum burst of acceleration, downshifting to the right gear.

Massive ceramic brakes mean there’s huge stopping power to rein it all in if everything starts moving too quickly, adding extra safety. It’s supported by a new post-collision braking feature to reduce secondary impacts in a crash, as well as a lane departure warning option, but with a new, more relaxed Sport mode for the stability control, there’s still plenty of fun on offer.

The Turbo has always had a joker up its sleeve when it comes to usability, and with a decent amount of luggage space and new options like a 40mm front axle lift to easily navigate troublesome bumps, this facelifted model is no different.

The cabin layout is functional, the two small rear seats gives the 911 a big advantage over its two-seat rivals, and 31.0mpg and 212g/km CO2 are impressive claims – even if low 20s is a reality day-to-day. 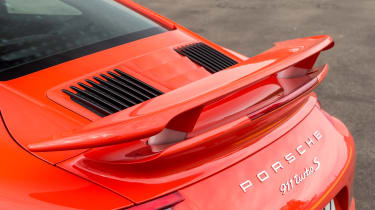 On top of that, the new Porsche Communication Management infotainment system has been carried over from the Carrera, so features like gesture control for the seven-inch touchscreen and online navigation are all on offer, plus Apple CarPlay.

These small changes inside have been matched by some visual tweaks, including new LED headlights, revised front and rear bumpers, and a subtly different engine cover featuring a new intake design and an Active Aerodynamics rear wing that deploys to add extra grip. The Turbo also gets a front splitter that, Porsche claims, gives similar levels of downforce to the hardcore GT3 RS.