Porsche's most hardcore, track-focused 911 is mighty machine. But is it a cut-price Ferrari 458 Speciale? 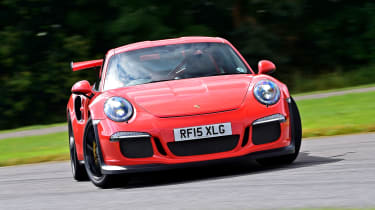 At £131,296, you could never call the Porsche 911 GT3 RS cheap, but at half the price of rivals like the McLaren 675 LT, the Porsche looks like strong value in comparison. Regardless of price, it’s one of the most involving, immersive ways of going quickly. Driving enthusiasts and track day fans will relish the RS’s breadth of talent. This is one of the finest Porsches ever.

Motorsport has always been an integral part of the Porsche brand. By testing out technology on track many racing innovations have trickled down to its road car range – and this is the latest and greatest of the breed to benefit from a host of trick features.

The first thing you’ll notice about the ‘991’ generation Porsche 911 GT3 RS is the imposing aerokit, comprising that jutting front splitter, gaping vents over the front wheel arches, deeper rear bumper with dual central-exit exhausts and a massive wing. It delivers 80 per cent of the downforce of the full-on GT3 R race car, and with a carbon fibre bonnet and wings, a magnesium roof and polycarbonate rear windows and screen, it’s also light, weighing in at just 1,420kg.

Pumping out 495bhp and 460Nm of torque, the 4.0-litre flat six is 25bhp and 20Nm up on the regular GT3, but the extra capacity means a slightly lower rev limit of 8,800rpm here. That’s no bad thing though, as for such a big unit it’s still an incredible feat of engineering. When rival manufacturers like Ferrari and McLaren are opting for turbos to cut CO2 emissions and boost power, Porsche’s engineers have resolutely stuck to their guns for the most hardcore model in the range. 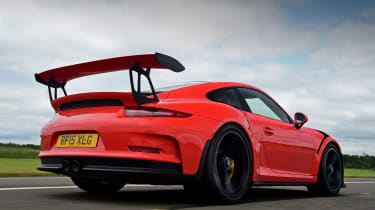 It’s all the better for it, too. If you wring the motor out to the redline the spine-tingling howl is intoxicating and addictive. With lots of torque on offer it’s also incredibly flexible. Short shift using the super snappy and smooth seven-speed PDK dual-clutch gearshift (like the regular GT3, there’s no manual option) and you can still make rapid progress thanks to the almost imperceptible changes. Keep your foot to the floor and with launch control the RS will officially sprint from 0-62mph in 3.3 seconds, romping on to a top speed of 193mph.

Acceleration is savage, and our test car was fitted with huge £6,248 optional PCCB carbon ceramic brakes that served up massive stopping power and lovely feel time after time, so the way it slows matches the way it goes. 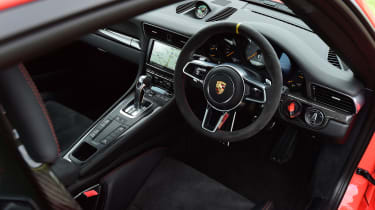 The 911’s rear-engined layout means there’s massive traction off the line and huge grip in the corners. But despite the razor sharp race car looks, the RS doesn’t handle on a knife-edge. Instead, there’s an incredible level of balance and predictability. You have to be quick and precise with your inputs to extract the most from the GT3, but with a communicative chassis and wonderfully detailed steering feedback the car always relays clear messages back to the driver.

It’s up to you to do the rest, but get it right and the rewards are huge. Wider tracks front and rear mean the 911’s low nose darts into corners, and you can feel the G-forces building with your confidence as you settle into the experience and learn how the car behaves. It’s thanks in part to the steering, as this is the best electrically assisted setup in any 991 model Porsche yet. 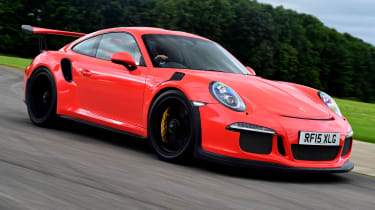 Twinned with a delightful adjustability you can enjoy even at normal speeds on the road, it’s visceral, but incredible fun. This is all expected of a car to emerge from Porsche’s RS department, but what isn’t is just how usable the GT3 RS is on a daily basis.

The last RS was stiff and uncompromising, with a firm ride – and while this new model is just as hardcore on the move, the suspension is plush and compliant, and in the softer of the adaptive dampers’ two settings, it’s no harsher over bumps than our 2015 Performance Car of the Year, the 911 GTS. 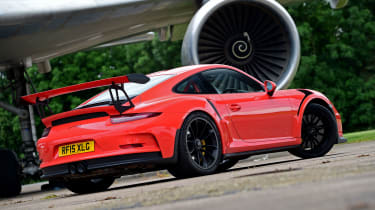 Of course, stiffen it up in Sport mode and it feels every inch a refugee racer. Big tyres do cause a touch of tyre roar at motorway speeds, and less sound deadening to save weight means you’ll hear every stone pinging off the underside of the body. But it’s still a very civilised car for long journeys, with the fixed carbon fibre bucket seats from the 918 offering plenty of comfort.

Sat-nav is a worthwhile £2,141 extra, while this car’s £1,805 Lava Orange paint and £393 black wheels really do the eye-popping styling justice. The only compromise you’ll have to make is at the petrol station. A 64-litre fuel tank and quoted efficiency of 22.2mpg combined and 296g/km CO2 mean the 911’s cruising range isn’t particularly far.