The track-bred Mercedes-AMG GT R, AKA "The Beast of the Green Hell", is a real rival to the Porsche 911 GT3 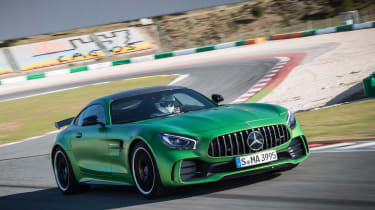 It's been a long time coming, but AMG has finally built a rival that's worthy of challenging the Porsche 911 GT3. However, there's much more to the GT R than just track ability. It's transformed the AMG GT into a far more capable and engaging road car thanks to its race-derived developments, and it’s AMG’s most convincing, exciting and useable sports car yet.

The Mercedes-AMG GT R is a track-focused, rear-wheel drive coupe that has one car in its sights - the Porsche 911 GT3. It takes the formula of the standard AMG GT and cranks it up to 11 by adding a host of trick race-derived parts that have been developed from the AMG GT3 racing car, and it's aiming to come out on top in the battle for barely disguised race cars for the road.

Under the skin - and you can get that skin in a few colours other than Merc's AMG Green Hell Magno in our pictures, but why would you have it in any other colour? - the GT R features the same front-mid engine layout as the standard AMG GT with the engine set well back in the chassis to improve weight distribution. The engine has been worked on to improve performance and responsiveness, while the rest of the dynamic package is designed to offer class-leading performance.

That means revised electronics for the seven-speed DCT twin-clutch gearbox, an uprated traction control system with nine different stages of response, and adaptive dampers that can be tuned for anything from a Monday morning commute to an open tourist day on the car's spiritual home, the Nurburgring Nordschliefe.

All this extra ability would be nothing without a suitably sporty makeover, and the AMG GT R doesn't disappoint. The active rear spoiler of the standard car is ditched in favour of a fixed wing, while the silver-rimmed forged alloy wheels on the car in our pictures are a £1,500 option that save weight over the standard rims. These feature tyres exclusively designed for the GT R. Up front there's a different grille design - which can also now be found on the AMG GT Roadster - and a titanium-finished sports exhaust makes sure everybody knows you're coming.

So the GT R follows the tried and tested formula of go-faster, drive harder. As a result, it’s lost some weight, added some power, increased its grip and sharpened up its reactions. The weight’s been lost through an all-embracing diet, with new forged wheels, carbon fibre structural parts, less sound deadening, a lithium ion battery, and lightweight seats.

The overall loss stands at around 15kg. It might not sound like much, but factor in all the other stuff AMG has put in and it’s quite an achievement. The go-faster equipment includes active aerodynamics to help suck the car to the road at high speed, those lighter, bigger wheels are shod with wider tyres and there’s some trick rear-wheel steering, which improves turn-in response and high-speed stability. A wider track front and rear helps here, too, as does a traction control system that offers a choice of nine settings – just like AMG’s GT3 race car. 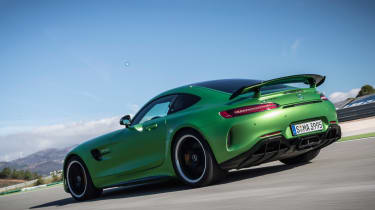 Troubling that traction control system is a 577bhp version of AMG’s now familiar 4.0-litre biturbo engine held in position by dynamic engine mounts. Power grows to thanks to a pair of revised turbos, nestling at the top of the 4.0-litre V8 engine, while the entire induction system has been revised to improve both output and response. That’s not quite the headline 604bhp found in the new E63 S, but AMG boss Tobias Moers says the twin-scroll turbos and the greater intercooling in that car are too heavy for the GT R.

The result of all those changes is a 0-62mph time of 3.6 seconds and a 198mph top speed – making the GT R the hardest charging AMG GT yet. The engine fires with the sort of evocative grumble and roar of the best V8s, driving the rear wheels via AMG’s quick-shifting seven-speed dual clutch automatic transmission. There’s the usual choice of drive modes from Comfort through to Race, the selection of which is done relatively simply via the toggle dial on the large V-shaped centre console – the rest of which is something of an ergonomic disaster.

Not that you’ll mind too much about the position of the buttons when you’ve pressed all the right ones, which here means Sport and Sport+ for the heightened responses they bring. Usually something to avoid on all but glass smooth circuits, AMG’s inclusion of adjustable coil-over variable damper suspension has created the finest riding GT yet, even on its most focussed settings. 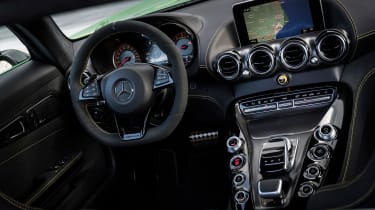 There’s a greater sense of connection allied to a more compliant ride, the brittleness of its GT S relation removed thanks to the GT R’s more sophisticated set-up. It’s to the benefit of feel at the front axle, too, the steering wheel not loaded with information, but certainly clearer and better weighted than in its relations. The turn-in response is markedly improved, thanks to the greater contact and wider track, and, of course, the effect of that rear-wheel steering system and aerodynamics, which also increase high speed stability.

That’s very obvious on the track, where the GT R can be pushed hard with confidence, its grip huge, its limits predictable and less difficult to manage than its sometimes tricky GT S relation. 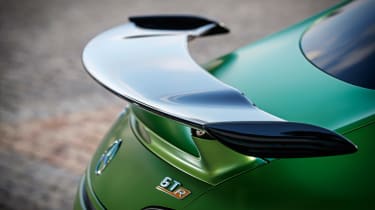 It sounds epic too. Allied to the greater speed, and the configurability of that trick nine-setting traction control make the GT R a hugely entertaining, engaging and exciting car around a circuit. That’s often to the detriment of its usefulness on the road, but the GT R doesn’t lose out to its GT siblings here, either. Indeed, this car is the best GT yet.