The Jaguar F-Tye SVR Convertible boasts 567bhp and will hit 195mph, but it's a little too powerful to be fully enjoyed on the road 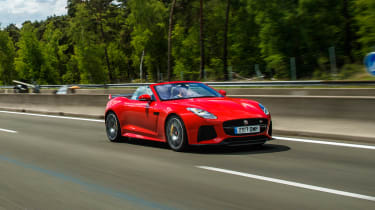 A thunderous engine and an entertaining chassis mean the Jaguar F-Type SVR will never fail to put a smile on your face. But it might be just a bit too fast to really enjoy on the road. If you like the racy styling add-ons, the F-Type SVR still looks fantastic, although the minor MY18 updates haven’t changed that much from the last time we drove the car. It remains less precise and communicative, yet more expensive, than a 911 GTS.

Jaguar has rolled out some minor updates to its F-Type range, including some new headlights, more supportive seats and infotainment system upgrades. They’re present for the whole range, but here we’ve tried the bonkers SVR version in convertible form.

It’s certainly the model to go for if you want to be noticed, as the over-the-top styling on the bumpers and bonnet, plus that huge rear wing, mean it really stands out. Plus, of course, the thunderous noise - you’ll certainly never fail to be heard in this thing.

The huge 5.0-litre V8 has 567bhp and 700Nm of torque, and means the SVR is good for 195mph - a number that tips 200mph in the Coupe. Any time you press the throttle the engine rumbles deeply, and if you push it further it’s positively explosive. In fact, it’s a part of the car that never really goes away, and something you can really enjoy all the time – so long as you don’t mind upsetting your neighbours. 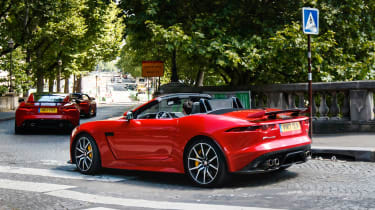 The noise is, of course, accompanied by incredible acceleration - 0-60mph takes just 3.5 seconds. The all-wheel drive powertrain puts down the power well, so it never feels unsettled – even in the wet. But sadly it’s so quick that you can never really enjoy the top end of that supercharged V8 on the road.

The eight-speed auto gearbox is good, and most changes are fast enough to keep up with the frantic pace of the SVR, but occasionally we felt a bit of hesitation. It’s certainly not as consistent as the PDK you’ll find in a Porsche 911.

The steering is quick and the Jag has loads of grip, so there’s lots of fun to be had on a twisty road, but it does feel heavy and isn’t as agile as we’d like. The normal V6 F-Type, which costs half the price of the SVR, is actually more fun on a normal road, as you can enjoy the engine a bit more before you reach the limit. But there’s no doubt that the SVR is more technically accomplished.

What the SVR does have, is a genuine sense of occasion. The lairy exhaust note, ostentatious styling and surprisingly comfortable ride mean it’s actually great fun to drive normally. Stamp the throttle on a slip road and there’s no doubt you’ll be grinning by the time you hit the motorway. 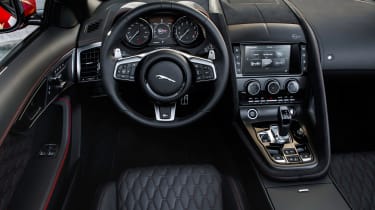 On the inside the SVR is kitted out with lots of lovely Alcantara trim, plus some new seats that are a bit lighter and a bit more supportive than the previous set. They’re not the most comfortable on a longer trip, however, and we found the backrest a bit oddly shaped after a few hours of driving.

The new InControl Pro touchscreen infotainment system is better than before, but it’s still fiddly to use on the move and the screen itself isn’t particularly hight res, nor very responsive. In fact the system on the latest humble Skoda Octavia is actually better, and even has a bigger screen - and that car costs nearly £100k less than the £116,365 F-Type SVR.