The Jaguar F-Type has been heavily updated, and this new V8 P450 model is a good all-round rival for the Porsche 911 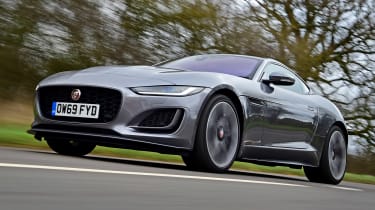 Jaguar’s efforts with the heavily updated F-Type prove you can teach an old dog new tricks; this seven-year-old sports car feels like it just about has the life in it to take on the latest Porsche 911. Perhaps the most welcome change is the rejigged line-up, though; the new P450 option means V8 power is likely to be more appealing than ever in this popular car. As the cheapest way into a supercharged 5.0-litre F-Type yet, it strikes us as a good all-round version of Jag’s 911 rival.

There’s no mistaking old and new when it comes to the Jaguar F-Type’s mid-life facelift. Compared with its usual standards, Jaguar has gone to significant lengths to make sure this refreshed version of its popular sports car – and established Porsche 911 rival – is a significant update from the model that’s been around for the past seven years; and the changes are more than skin deep.

That means when you delve beneath the new look – which comprises a totally new front end with a larger grille, more aggressive, slimmer LED headlights, a clamshell bonnet and new tail-lamps – you’ll discover that Jaguar’s engineers have been just as busy as the company’s design department.

The chassis has been updated with new suspension, comprising fresh components, new steering, a new sub-frame and a tweak to the electronic differential. New tech also arrives in the form of a 12.3-inch digital instrument panel, plus Apple CarPlay and Android Auto phone connectivity, but the 10-inch central display is still a little outdated. 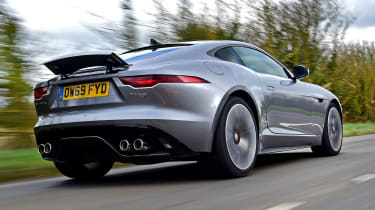 Jaguar has changed the engine line-up, too, with six-cylinder power now off the menu. That means the revised F-Type only comes with four and eight-cylinder motors. But to compensate, an additional V8 option, badged P450, arrives to bridge the gap between the entry-level 296bhp 2.0-litre four-cylinder car, and the range-topping supercharged 567bhp 5.0-litre V8 F-Type R.

The P450 uses the same engine as the R, but detuned to 444bhp. Rear-wheel-drive and four-wheel-drive versions – as driven here – are available, but both use an eight-speed automatic transmission with wheel-mounted shift paddles for manual control of the gearbox. As tested, the price of this First Edition version of the F-Type P450 is slightly less than an entry-level Porsche 911 Carrera, but it’s a different animal.

Immediately, it’s impossible to ignore the engine under the bonnet, and that’s a big tick in the Jag’s box given many buyers will see its engine as a key reason to part with their cash. The supercharged 5.0-litre V8 feels like it lives a relatively unstressed life up front, operating nowhere near the limit it has been engineered to withstand. You sense that it can give a lot more than Jaguar has allowed in this application. 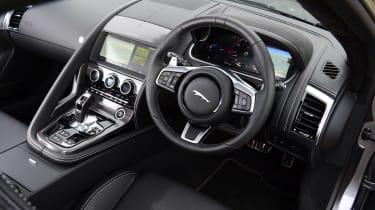 As such, proper 911-baiting performance feels just out of reach, also partly due to the F-Type’s weight. Yet its growling V8 engine note and character fly in the face of the Porsche’s overwhelmingly turbocharged 3.0-litre flat six, especially when you open the valves on the standard active exhaust.

If you want a V8, there are alternatives to the Jag for the price it commands, but none of them are really straightforward sports cars. The Mercedes-AMG C 63 S Coupé is faster, more powerful and its V8 is arguably just as enthralling, but as a four-seater it isn’t in the same style-conscious market as the F-Type. The same goes for the Audi RS 5.

If you’re buying the Jaguar for its sports car status, you won’t be too disappointed in the corners. Rear-wheel-drive, V8-powered versions of the F-Type have had a reputation for being tricky in the past, but during our first taste of the revised F-Type in Portugal earlier in the year, we argued that the rear-drive P450 could be the sweet spot of the range, with a level of adjustability that makes it a controllable hooligan.

Perhaps, here on soggy, less-than-perfect UK roads, the extra outlay you’ll fork out for the all-wheel-drive version will make sense. There’s a surefootedness to the V8 model that allows you to extract so much from the engine with little worry, but it does mean that the somewhat compact F-Type feels slightly heavy with the extra mechanicals. It doesn’t seem as agile or as predictable as a 911, and the Porsche remains a much sharper tool compared with the Jag’s brutish character. 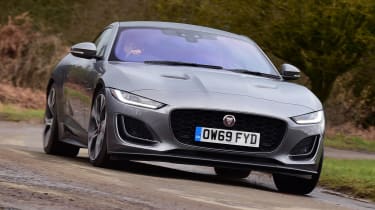 The ride, as is to be expected, is firm, but post-facelift the latest F-Type is a more refined car than the previous version and not at all uncomfortable. As for equipment, opt for a First Edition car like ours and you’ll get a similar level of kit to what you’ll find on the R-Dynamic version of the F-Type. Powered, folding, auto-dimming mirrors with a memory function are included as an add-on, as are the 12-way electric seats.

But the majority of the upgrades on these First Edition models are embellishments such as unique treadplates, Windsor leather upholstery, aluminium gearshift paddles, and 20-inch alloy wheels.

We reckon cheaper, more customisable R-Dynamic models will probably curry more favour with those signing on the dotted line, and customers buying an F-Type could even add a few options to their car before they hit First Edition money, too.