Any concerns that the Mercedes-AMG C63 would’ve lost an ounce of character by inheriting the downsized 4.0-litre twin-turbo V8 are washed away within seconds of starting the engine. The Coupe benefits from all the poise and composure benchmarked by the saloon, and turns it up to 11. It’s immensely rewarding to drive at any speed, and the quality interior sets it apart from ageing rivals. That trademark V8 howl is simply the icing on the cake.

When we drove the all-new Mercedes-AMG C63 Coupe on European roads late last year, we were impressed by its blistering performance and everyday usability. So now we’ve got the car back on UK roads, should the BMW M4 be worried?

In short, yes. The raucous Merc has retained every bit of the character we experienced in November – with the same muscular powertrain and thunderous soundtrack. Our first taste on British tarmac came courtesy of this lairy C63 S Edition 1, complete with matt grey paintwork and not-so-subtle yellow stripes.

As with any AMG-badged Mercedes, the engine takes centre stage. The old car’s naturally aspirated 6.2-litre V8 has been replaced by the now tried and tested 4.0-litre biturbo, which, in this S model, is tuned to deliver 503bhp. 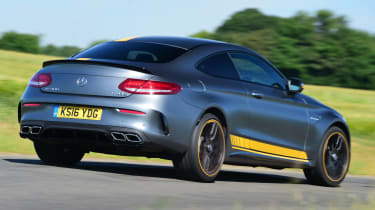 Start it from cold and it’ll burble into life with a satisfying growl. The standard-fit AMG Performance exhaust system on this version adds another dimension to the already aggressive Coupe – and even in its normal setting offers a welcome change from the clattery diesels found on lesser C-Class models.

Around town, the C63 is firm but not uncomfortable. It does have a sharp edge and a tendency to follow ruts in the road, but leave it in Comfort and there’s enough give in the dampers to enjoy the car on all surfaces.

But the harsh side of the AMG comes into its own on the right road. Body control is exemplary even in the car’s softest settings, but dial things round to Sports+ and you can have some serious fun.

AMGs of old were often criticised for their muscle car point-and-shoot character, but this latest C63 proves Mercedes is no stranger to a corner. It retains that old-school charm, but matches it to a taut chassis that ensures the car stays near enough completely flat through the bends. The steering is beautifully weighted, too, giving you confidence to place the car exactly where you want it. 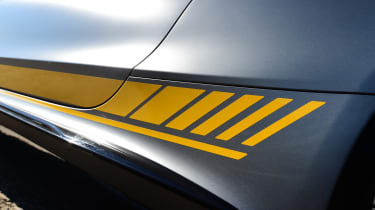 While other C-Class Coupes – including the half-fat AMG C43 – use Merc’s new nine-speed automatic gearbox, the superior torque of our C63 forces implementation of the older seven-speed set-up. It still shifts cogs smoothly, but ask it for too many downchanges and it’ll sometimes hesitate before giving you the right gear. There’s no manual option either, so if you want that analogue sensation then we’d suggest a visit to your local BMW dealer.

But that’s a minor niggle in what is otherwise a beautifully rounded product. Performance is ferocious, with this S model accelerating from 0-62mph in just 3.9 seconds before heading to an electronically limited 155mph top speed.

But it’s the way the revs rise that’s so impressive. Despite the low driving position, heavy steering and sports exhaust, the C63 Coupe doesn’t feel like a handful to drive. Ok, if you disable all the systems this Mercedes-AMG will do smokey burnouts just like the old car, but keep things switched on and it’ll happily cruise at motorway speeds without requiring oversized biceps or industrial ear defenders. In fact, at 70mph, the car feels just like a standard C-Class Coupe – so you’d better watch that speedo. 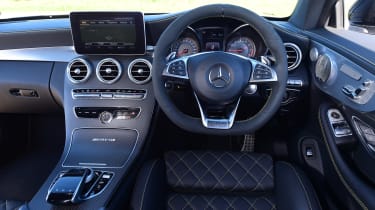 So the C63 is more than a match for the M4 behind the wheel. But in top-spec Edition 1 guise, it’s perhaps not as clear-cut as it might otherwise be. For starters, the model you see here costs a scarcely believable £76,910 before options – which is £16,845 more than the accomplished (but less powerful) M4 Competition Package. Despite most buyers opting for PCP or company finance deals, that’s going to equate to more than a few extra pounds per month. 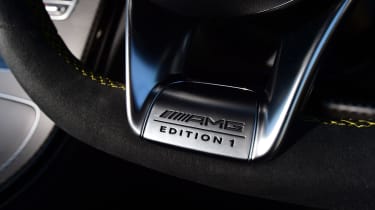 Standard equipment is good, too, with all cars getting the AMG bodykit, LED headlamps and that AMG Performance exhaust system. Inside, you’ll find swathes of leather on the dash and doors, as well as some lurid yellow stitching if you opt for the £3,000 Edition 1 Motorsport Package – which also includes the yellow-rimmed wheels, extra gloss black aero and carbon ceramic brakes.

As on all modern Mercs, the cabin is finished to an extremely high standard, with plenty of soft touch materials and an easy to use infotainment system. Visibility isn’t bad considering the car’s purpose, but the super-clear rear-view camera comes in handy when parking. The £1,695 Driver Assistance Package could be useful, too, which adds things like blind spot assist, pedestrian detection and automatic radar-guided cruise control.