Competition Pack costs just £3,000 more than the standard BMW M4, but is it worth it?

Early speculation suggested that the M4 Competition Pack might cost between five and six grand more than standard so a rise of just £3,000 makes it seem like a lot of car for the money. In most respects it delivers on its promise and then some, but as an everyday proposition the standard M4 might be a better bet if refined performance is what you seek. For the average M4 driver, though, the good bits must surely outweigh the less good. Which makes the Competition Pack the bargain of the range, so long as you can put up with the ride.

Not a lot of drivers will step out of a BMW M4 thinking no, not fast enough, stiff enough, or thrilling enough to drive. But there's always a few mad people who want just a little more and for them, the Competition Pack, available for the M4 and M3 saloon could be just the touch.

And the best news of all is that it costs a mere £3,000 more than the standard M4 at £59,595. That's competitive enough, reckons BMW GB, to entice around 70 per cent of M4/M3 drivers to opt for the Competition Pack from now on.

Power rises by a small and not hugely significant 19bhp thanks to a minor redesign of the cylinder head, hiking the output from the 3.0-litre twin turbo straight six to 444bhp. Torque however remains the same at 550nm, as does the car's 1,422kg kerb weight. 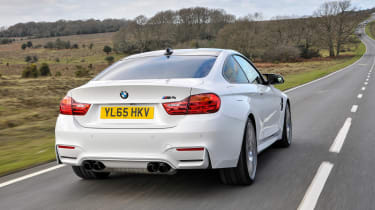 This is sufficient to shave 0.1sec from the 0-62mph time (it drops to a faintly ridiculous 4.0sec with the optional DCT gearbox fitted, as in the test car) while economy remains unchanged at 34mpg on the combined cycle. Top speed stays limited to 155mph.

Outright performance is not chiefly what the Competition Pack version is all about however. Handling on the other hand is, hence the reason why the springs and dampers are stiffer all round, the tyres slightly wider, the electronic drive program recalibrated to deliver more thrusting responses whatever it is set to.

Similarly, the optional Adaptive Suspension becomes standard while the electronic differential has also been retuned, supposedly to deliver yet more traction in all of its settings. On a track this is exactly what it delivers. For a car that weighs less than 1,500kg, has this much torque and which is rear wheel drive, the M4 Competition does indeed generate monster grip on its new 20in wheels and tyres - so long as said track is dry and smooth of surface. 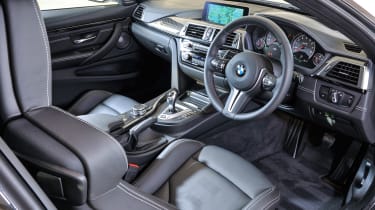 On the road, however, the car's extra suspension stiffness and minor increase in energy, mated to its more aggressive diff, means it can feel pretty lively at the rear end, even in the dry. And in the wet the traction control light flashes pretty much all the time in anything below fifth gear, with anything approaching a decent amount of throttle applied.

But then that's what the Competition Pack version of a car that was already, shall we say, entertaining at the rear end is inevitably destined to drive like. From the moment it starts to move the Competition M4 feels notably more energised, more alive beneath your backside, and for most of the time that's exactly how you'd want it to feel.

You don't really notice the extra performance, the engine maybe feels a touch more crazed over the final 1,000rpm as it homes in on the red line. But what you do notice immediately is the extra fizz from the suspension, a slightly sharper response from the steering (due to the suspension changes rather than any alteration of the steering system itself) and an increase in road noise, especially on coarse surfaces. 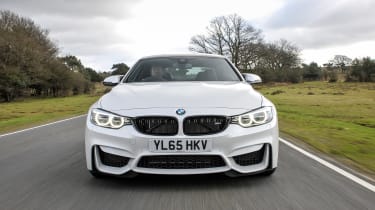 Overall it's a step forwards dynamically, mainly because the Competition Pack mods make it feel more alive - more like a true blue M car if you will - compared with the regular version. But be under no illusion, there is a clear compromise in ride and noise refinement here. If you find the standard M4 close to the knuckle, the Competition Pack will be a step too far.

Elsewhere there are various styling tweaks to distinguish the Competition Pack, both inside and out. The major pointers are the new 20in quasi M4 GTS wheels, plus redesigned door mirrors and standard fit 'high gloss' interior trim.

To drive, the Competition Pack definitely feels superior in most ways compared with the regular version, and that's backed up by the way it looks, even the way it sounds, thanks to its standard fit sports exhaust. Together, such upgrades make the Competition seem like a bargain, even if they do place the M4 right on the cusp of what's acceptable when it comes to ride and noise refinement on the average UK road.