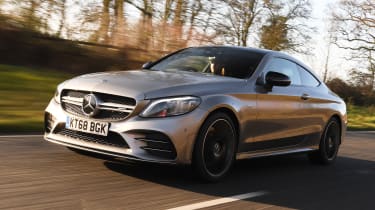 The updated C 43 is still a worthy addition to Mercedes’ AMG range. Despite not being as fast as one of the new hybrid 53s – or as boisterous as the brand’s flagship V8s – it’s smooth, agile and grippy, while also offering one of the best cabins in the business. The V6 engine is characterful and quick, but the C 43 remains expensive to buy and run. Rivals such as the new BMW M2 Competition are more engaging, too.

Last year, the entire Mercedes C-Class range was given a subtle nip and tuck. Every version – saloon, Estate, Coupé and Cabriolet – benefited from updated lights and infotainment displays, plus extra options.

The AMG versions were overhauled, too. The C 43 model, driven here in the UK for the first time, has an additional 23bhp and a wider torque band. It also gets aero tweaks, a new grille and round quad exhausts.

But with the introduction of the 53-badged hybrid AMGs further up the range – both the E-Class and CLS are now available with mild-hybrid tech – are the turbo 43 cars already past their prime? 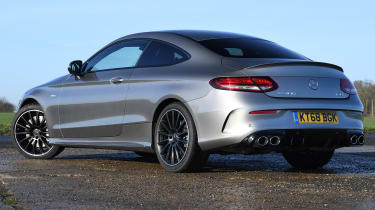 On-paper performance certainly isn’t lacking. Despite the extra power, the C 43 is no faster from 0-62mph – the benchmark sprint still takes 4.7 seconds – but the car feels pretty eager under hard acceleration. Throttle response isn’t as instant as it is in the electrified AMG E 53, yet the C 43 is far from sluggish. It pulls strongly, while the tried-and-tested nine-speed automatic gearbox almost always finds the right cog at the right time.

Every version comes with an AMG Performance exhaust, which sounds particularly saucy in Dynamic mode. In this regard, the C-Class Coupé has far more character than its bigger hybrid siblings. Even if it can’t match those cars for straight-line grunt, it’s definitely more vocal.

Through corners, the C 43 continues to feel secure, surefooted and agile. The 4MATIC all-wheel-drive system works wonderfully at this time of year, while the new ‘Slippery’ setting ensures drama-free getaways from a standing start. Compared with the standard C-Class, the C 43 exhibits a heightened level of sharpness to the steering, too, which suits its sporty character.

That agility does mean the ride is quite firm; the Coupé sits only just the right side of being too harsh for UK roads, in spite of the standard AMG Ride Control. It’s a problem that is likely to be at least partially rectified by shunning our car’s optional 19-inch wheels, but even in Comfort there’s an unavoidable stiffness to the way the C 43 drives. It’s no worse than a BMW M2, however, and while the Bavarian model is a more engaging car, as an all-round, all-season, daily driver the Mercedes is hard to fault. 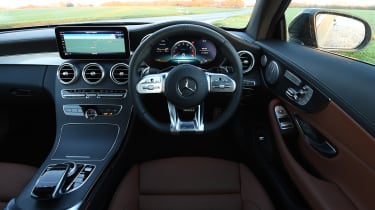 Elsewhere, the updated C 43 gets the same lightly revised interior as the rest of the C-Class range. Our car featured the fantastic 12.3-inch digital dials, which replace the standard analogue display. They come as part of the pricey (£4,995) Premium Plus Package, but work wonderfully alongside Mercedes’ COMAND system. They are customisable to show myriad information in various formats, and present everything you need right in front of your eyes. The bold red shift lights are a particularly cool nod to the firm’s brutish V8 range-toppers.

Of course, the interior is trimmed in all the finest materials; the C 43 is easily a match for its closest rivals in this regard. The Saddle Brown leather in our model looked great, and while the seats are a little firm, they’re nicely supportive when you’re driving quickly. The same can’t be said of the rear chairs, which are tight, cramped and tricky to get into. Mercedes provides a pair of Isofix points, but you’ll need to be a contortionist to fit a child seat back there.

However, alongside rivals, the Coupé looks expensive. You can buy a BMW M240i for almost £13,000 less, while the feistier M2 Competition, which beat the Audi RS 3 Saloon in a recent twin test (Issue 1,548), also costs less than £50,000. Standard kit includes LED lights, DAB radio, sat-nav and 18-inch rims, but factor in the sub-30mpg fuel economy and high emissions, and you may struggle to make the finances stack up.