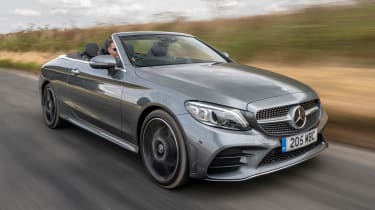 The concept of a diesel drop-top still feels a peculiarly British one, but if you plan on doing European holiday sojourns in your car, something like the C 220 d makes a lot of sense. The new engine is much smoother and the focus on comfort means the C-Class is a great choice if you want to cruise for long distances in style.

The Mercedes C-Class Cabriolet was our Convertible of the Year as recently as 2017, but the transfer to the facelifted model meant it wasn’t included this year. This is our first chance to try the revised car and see if it stands a chance of regaining its crown.

From the outside, the tweaks mirror those that we’ve already seen on the Saloon and Estate. There are slightly different bumpers, with flashes of chrome, new headlights and, if you pick an AMG Line version like our test car here, a new pattern in the front grille.

The revised C-Class Cabriolet has three engine options so far: the C 200, a four-cylinder 1.5-litre petrol with mild-hybrid tech, the diesel C 220 d and the six-cylinder petrol C 43 AMG. 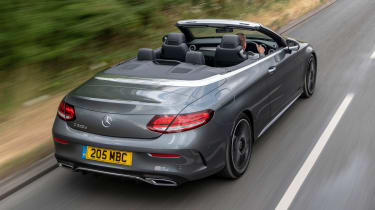 Here we’re trying the 220 d, and it’s the model that probably represents the greatest scope for improvement, because the previous car to carry this badge was punchy but relatively crude.

Fire up the engine and you will be aware that you’re in a diesel, but it quietens down quickly, leaving more of a smooth drone in place of any clatter. While it would be an exaggeration to say that the engine note is pleasing, it would also be harsh to describe it as unpleasant.

This is a car, therefore, without the aural appeal of the C 43, but with diesel power under the bonnet, it’s capable of cross-continent travel with infrequent stops for fuel. The nine-speed auto box enhances the relaxed nature, because it’s smooth, slick and feels happy to work with the torquey diesel engine.

This character would be compromised badly by any great deficiency in ride quality, but the latest C-Class has remained refreshingly focused on comfort, and that’s the case here, too. There’s a bit of body roll in corners, but all UK models get lowered sports suspension as standard, so in general the car stays composed enough. The steering is accurate, but doesn’t really communicate enough to involve you. 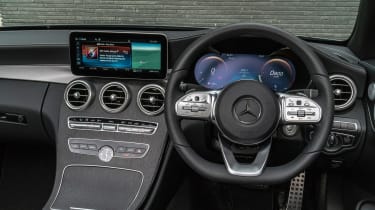 Lowering the hood (a process that takes 24 seconds) doesn’t change matters much. Keep all four windows up and you can cruise along at a fair old lick without too much turbulence in the cabin. Rear-seat passengers will be able to join in the conversation, even if it is just to grumble at the amount of legroom they’re enduring. That second row is still better suited to children.

At least the boot remains a decent size; the 285-litre capacity with the roof lowered is enough for a couple of reasonably big overnight bags.

As with many recent Mercedes, the C-Class Cabriolet’s star turn is its cabin. All UK cars get a 10.25-inch central display that’s crisp and quick to respond to inputs, either through the rotary controller between the front seats or the touch-sensitive pads on the steering wheel.