Has a recent update lifted the Mercedes C-Class Estate above the Audi A4 Avant and BMW 3 Series Touring? 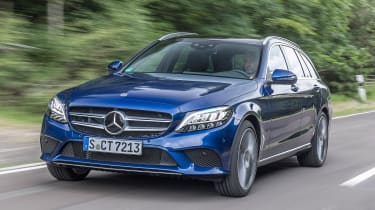 Small tweaks ensure the Mercedes C-Class Estate stays competitive alongside the BMW 3 Series Touring and Audi A4 Avant. Tech updates keep this car right at the sharpest end of the sector, but while the new 2.0-litre diesel in the C 220 d ups the game from a performance and fuel economy perspective, it doesn’t quite push the bar far enough on refinement.

The facelift for the new Mercedes C-Class must have been a fairly comprehensive project, given the firm has refreshed the entire line-up and all four bodystyles in one fell swoop.

Though it plays second fiddle to the saloon from a popularity perspective, the Estate is still a hugely important member of the C-Class team, and a reason why the C-Class found its way into the top 10 best selling cars in the UK in 2017.

Merc’s focus with this recent facelift isn’t all cosmetic, either. Design changes are few and far between, in fact, with the recognisable updates limited to a set of new headlights and subtly restyled bumpers. Instead, new tech and infotainment grab the headlines, alongside a host of new and improved engines. 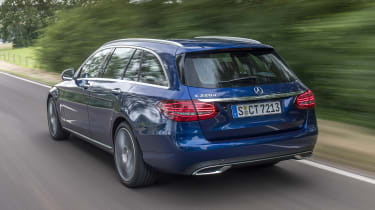 We’ve already sampled the all-new 1.5-litre 48-volt mild-hybrid petrol unit in the C 200 saloon – but that’s not the only fresh engine in the C-Class range. A new diesel arrives too, with the firm’s latest 2.0-litre motor transferred straight from the E-Class.

It’s an engine we’ve long been waiting for. The C 220 d has been the best selling C-Class model for some time, but the old 2.1-litre motor was far from perfect. It was always a little gruff, and its limited torque reserves felt stretched on the motorway. The newer engine (codenamed OM 654) has largely addressed these problems in the E-Class, so now it’s time to test it in the smaller C-Class.

Performance is improved, for sure. The 0-62mph sprint takes seven seconds, while the sizeable slug of torque (400Nm) is probably all you’ll even need in every day driving. It’s delivered in a smooth, linear fashion too, with the nine-speed automatic gearbox feeding power to the rear wheels and shifting through its cogs with minimal fuss. As ever, selectable driving modes allow you to change how responsive the car feels.

It’s more refined, too – though not by as much as you might hope. Its impact doesn’t feel as great as it does in the E-Class, seeming less hushed in the smaller C-Class. It’s an improvement, but the C 220 d still doesn’t quite feel as quiet as it could be.

Claimed fuel economy of 58.9mpg is decent, meaning this is the pick of the C-Class range for drivers intent on racking up the miles. Be careful of your choice of wheels, though; the 19-inch wheels on our test car push CO2 up to 132g/km – adding an extra £310 to your first tax bill over the same car on 18-inch rims. Of course, the tax cost thereafter is identical, whichever car you go for. 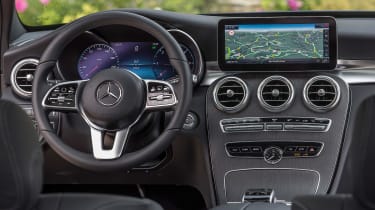 From behind the wheel, there’s little tangible difference between the saloon and the slightly heavier estate when it comes to dynamics. The C-Class is a safe, solid and direct car to drive with good body control, but it’s not exactly exciting. Ride quality is good on the optional Airmatic suspension, with only the worst cracks and pockmarks enough to unsettle things. With this option ticked, you can firm things up for a sportier ride, too.

From a practicality perspective the C-Class Estate is still competitive, but the facelift doesn’t do anything to elevate it above and beyond its rivals. The 460-litre load bay is accessed through a wide-opening estate tailgate, and folding the rear seats flat opens up a generous 1,480-litre cargo bay.

Elsewhere, the cabin has been mildly updated with new infotainment technology. The standard 10.25-inch central display is a big improvement on the pre-facelift car’s system with much sharper graphics. The availability of digital dials for the first time means that the C-Class’s cabin has both the quality and modernity to match and possibly surpass the Audi A4, too.