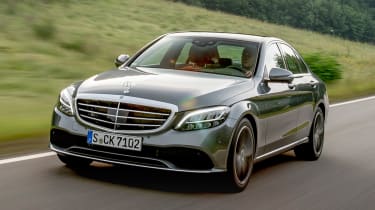 Even though the C-Class looks almost exactly the same as before, these important and varied updates add up to create what could make it a truly class-leading car – for the time being, at least. The new 1.5-litre petrol engine isn’t perfect, but the 48-volt mild-hybrid system is clever and works really well. And the new 10.25-inch infotainment package moves the game on, too.

It’s all change in the executive sector at the moment. There’s an all-new BMW 3 Series around the corner, and Audi is prepping a mid-life refresh for the A4. But Mercedes is first to pull the trigger with the facelifted C-Class.

While the design changes very little (headlights, bumpers and not much else), Mercedes claims this update is the most extensive it’s bestowed on its best-seller.

The marque says you’ll find 6,500 new parts on the latest car, including clever 48-volt mild-hybrid tech under the bonnet. Our test car was a German-spec Elegance model; its closest relation in Britain will be the entry-level SE version. 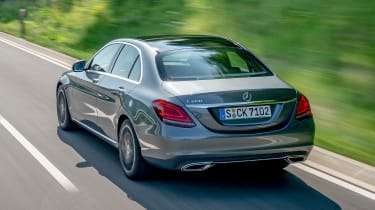 The new 48V-assisted tech is fitted to the C 200 only and comprises a 1.5-litre four-cylinder petrol unit, using twin-scroll turbocharging and an electrical system driving a belt starter-generator. It makes its debut here, but will appear in the E-Class and other Mercedes models before the end of the decade.

Falling under the firm’s electrified EQ brand, the new hybrid tech is called ‘EQ Boost’. It offers an additional 14bhp to the 181bhp turbocharged engine, and means that the motor can be shut down completely for emissions-free coasting.

This feature is most noticeable on the motorway. Lift off the accelerator and it takes just a second or two for the engine to cut out. During gradual deceleration it can recuperate kinetic energy to recharge the battery, while stepping back on the throttle fires the petrol motor back up in an instant.

Drive to the Eco setting’s strengths and you’ll chalk up plenty of petrol-free miles on longer highway runs. The quoted 46.3mpg official fuel economy pegs it behind the old 2.0-litre C 200, but quantifying any significant economy gains is difficult, given that this new car has been tested under new – and supposedly more accurate – WLTP rules.

The C 200 also has Sport and Sport+ settings, which make the most of the total power and torque the car offers. Performance is good; capacity-wise this is the smallest engine ever offered in the C-Class. But the 7.7-second 0-62mph time isn’t to be sniffed at.

The only thing letting the new engine down is refinement. While Mercedes’ engineers seem to have nailed the 48V system and the seamless engine cut-out, the petrol unit makes its presence known when accelerating through the gears. Mercedes expects UK buyers (the majority of whom will be company car drivers) will still be drawn to the C 220 d, however, which is now fitted with the fresher 2.0-litre diesel from the E-Class. 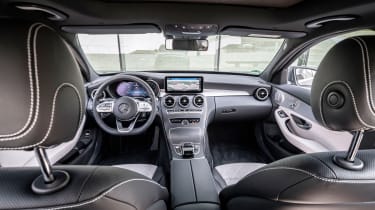 We also tried this motor in a facelifted Estate. It’s much quieter and more refined than the old 2.1, while feeling torquey enough for everyday driving.

Mercedes has made no changes to the way the car handles. The C-Class is still solid, sharp and composed to drive, but without a truly exciting edge. It rides sweetly and is comfortable at all times.

The most eye-catching tech is found inside, with a substantial infotainment upgrade. All UK cars get a 10.25-inch display with sat-nav as standard. It’s a massive improvement, thanks to the crisper graphics and better menu layout.

Digital dials are available for the first time as well, although only as part of a £2,795 Premium equipment package.