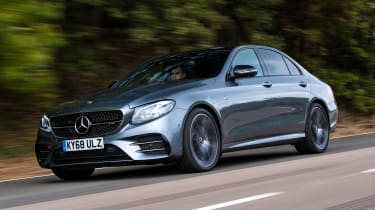 The Mercedes-AMG E 53 is a swift performance saloon that blends usability and power fairly convincingly. There are a few question marks over the ride in some cases, but the characterful motor makes up for this shortfall. This is the heart of the 53, like many AMG models. It makes good use of its mild hybrid tech and boasts all the benefits of any E-Class model, so when you don’t need the performance, it’ll be a pleasant place to be.

Consider the Mercedes-AMG E 53 as a half-way house between the full twin-turbocharged V8 madness of the E 63 and E 63 S and a much brawnier alternative to Mercedes’ E 200 regular petrol. It’s a sweet solution too, and much of that is due to the new engine.

The 429bhp 3.0-litre straight-six engine is deliciously smooth. You can rev it out if you want, but there’s more performance to be exploited in the mid-range, thanks to the turbocharged 520Nm slug of torque. Even in a big car such as this, 0-62mph only takes 4.5 seconds. 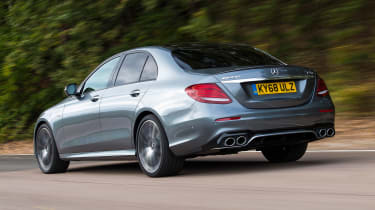 It never feels fast enough to alarm you, but by the same token it doesn’t feel strained or slow.

The engine’s character is lovely. You don’t really notice the mild hybrid system’s momentary 22bhp, 250Nm hit because it’s so well integrated, but it is there to boost throttle response and eagerness when you get on the gas. After its initial deployment there’s just a smooth flow of power to all four wheels.

Traction is great thanks to Mercedes’ AMG-tuned 4MATIC system, and you can just feel the E 53’s well-hidden sense of fun as the setup helps you out in turns, slightly tightening your line.

Otherwise it’s sensible rather than scintillating. The steering is a nice weight but a little mushy – although no worse than an equivalent Audi or BMW, while the gearbox shifts positively, but there is a slight pause between pulling the paddle and the gear engaging.

In Sport+ mode the motor’s personality is amplified nicely by the exhaust, only it’s also accompanied by a nasty augmented sound inside the cabin that doesn’t quite work so well.

The rest of the package is sweet. Sitting on 19-inch alloy wheels the ride in Comfort mode is just a little knobbly at low speed, but the faster you go the damping smooths out as the relatively silky suspension control delivers (mostly) decent comfort on sweeping A roads and motorways. Albeit catseyes and expansion strips still cause a thump. 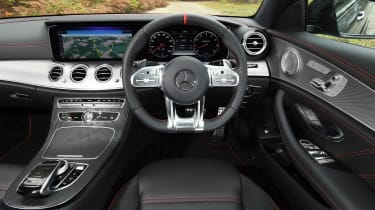 Up your commitment and the 1,945kg kerbweight shows, so you’ll have to toggle the air suspension to Sport or Sport+ mode. However, this degrades the ride quality, so in our experience it’s best to bask in the softer side and accept that the E 53 doesn’t have the poise of its BMW equivalent.

The cabin lives up to the £63,790 price tag. 53 models get Merc’s twin 12.3-inch displays as standard and some sportier AMG touches, such as a chunkier body kit, those wheels and red seat belts. Other standard kit includes multi-beam LED lights, Apple CarPlay and Android Auto, a 360-degree parking camera and the kind of trim you’d expect at this level – although man-made Artico leather instead of real hide is still a bone of contention.

A big family saloon, regardless of its powertrain, has to deliver decent practicality too – and the E 53 absolutely delivers. The 540-litre boot is plenty big enough, legroom inside is great and with a 66-litre fuel tank cruising range is good.

That’s boosted by the mild hybrid system’s efficiency enhancing potential, as the AMG’s claims stand at 32.5mpg and 200g/km CO2. Not great compared with a diesel, but adequate for a saloon of this size, weight and power.