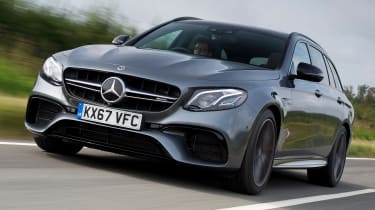 Ticking every box from practicality and performance to quality, kit and character, the new Mercedes-AMG E 63 Estate could well be all the car you’d ever need. Yes, it’s expensive to buy and run, but its ability to teleport the entire family (and the kitchen sink) in complete comfort is nothing short of astounding. With no BMW M5 Touring in the pipeline and the new Audi RS 6 still some way off, Merc has the market to itself.

Mercedes has never offered British buyers a 4MATIC-equipped AMG E 63. Despite selling well in other markets, we’ve always had to make do with the livewire and tail-happy rear-wheel-drive versions.

However, the introduction of the latest saloon changed this. Both the ‘basic’ E 63 and more powerful E 63 S are now four-wheel drive as standard, in fact. But the maker has now added a more practical estate model to its range, and we’ve driven it in the UK for the very first time.

The on-paper stats are impressive. The wagon weighs more than two tonnes, yet will sprint from 0-62mph in just 3.6 seconds. It’ll do 155mph flat out, and return 31mpg, too. 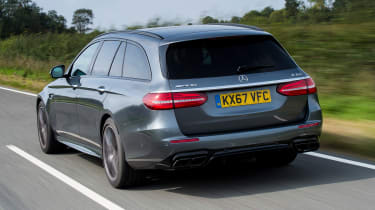 Granted, if you exploit the car’s brutal performance you won’t come close to that figure. But only 10 years ago the E 63’s forefather claimed only 19mpg and emitted 345g/km of CO2. Today’s car is 40 per cent cleaner, but is still in the highest bracket for company car tax.

The transition from rear to all-wheel drive has had an alarming effect on the car’s everyday usability. It’s gone from being an unpredictable (if highly entertaining) muscle car, to a secure, stable, and lightning-fast crackerjack designed to rival Audi’s ageing RS 6 Avant. Turn-in is razor sharp, while the E 63’s strong brakes and precise steering provide plenty of confidence on quick and broken B-roads.

But as with any AMG, the ballistic 4.0-litre turbo V8 remains the star of the show. It’s soft gargle on start up turns into a fully-blown thunderstorm at full chat, with the £1,000 AMG Performance Exhaust unleashing a cacophony of gunshots as you lift off the throttle.

You’ll rarely notice the extra weight over the rear axle, with the all-round pneumatic air suspension striking a great balance between ride comfort and handling. The different drive modes (Comfort, Sport, Sport+ and Race) adjust the adaptive dampers, throttle, steering and gearbox response, and alter the E 63’s character accordingly. It’s certainly more playful and lighter on its feet than the Audi – not to mention faster in a straight line, too. 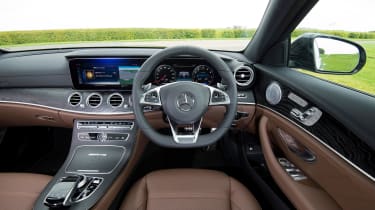 Regardless of which setting you’re in, the E 63’s dual-clutch gearbox punches home changes with unrivalled immediacy, and its nine ratios allow muted cruising when the occasion presents itself. The standard-fit 19-inch wheels do kick up a degree of unwanted road noise, but rarely will you notice harsh jolts or crashes in the cabin.

But despite serving up 563bhp and 750Nm of torque, the new E 63 is just as practical as the standard E-Class Estate. That means the same 640-litre load bay, which will expand to a class-leading 1,820 litres with the rear seats folded flat. The AMG E 63 even comes with a three-year unlimited-mileage warranty, while service plans start from £45 per month.

As you’d expect, for £81,130 you get a load of kit thrown in as standard. Every E 63 gets the aforementioned air suspension and 19-inch alloy wheels, as well as LED headlights, AMG sports seats and Merc’s widescreen cockpit display. The cabin is beautifully finished in Nappa leather, while our car also featured wireless charging (£250), a heads-up display (£825) and heated rear seats (£295). The Premium Package adds keyless go, a panoramic roof, Burmester stereo and mulitbeam intelligent lighting for £2,595.