We get behind the wheel of the all-new BMW 8 Series in M850i guise, but does the driving experience match up to its stunning looks?

To some, the BMW 8 Series might represent a somewhat confused identity; it’s not quite as refined as a Mercedes S-Class Coupe, nor is it as sharp to drive as an Aston Martin DB11. But in reality, it manages to occupy a previously unfilled niche between being a GT and a sports coupe. Refined, quick and comfortable, the M850i offers sweet handling and adequate practicality.

Is it better to be brilliant at one thing, or pretty good at everything? BMW thinks the latter, based on its approach to the fresh 8 Series Coupe.

The German firm reckons its all-new 8 Series, which will later spawn both Convertible and four-door Gran Coupe models, can compete with the Mercedes S-Class Coupe on the posh, cosseting side, yet square up to the Aston Martin DB11 for the sporty stuff.

BMW’s latest all-rounder takes the form of a front-engined, four-wheel-drive four-seater. Its wheelbase is 123mm shorter than the S-Class Coupe’s, but 17mm longer than a DB11’s. It perhaps lacks the grace of those competitors in the style stakes, but it has huge presence in the metal (and carbonfibre, in the case of the optional lightweight roof). It looks brawny and aggressive in all the right places, with broad shoulders and 20-inch alloy wheels filling the swollen arches. LED lights are standard, with laser lights available as an option – the slimmest on any BMW. 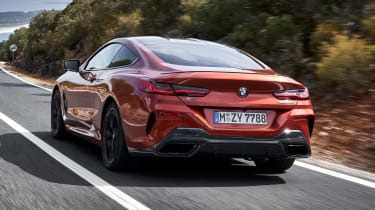 Inside, the 8 Series looks and feels worthy of its £100k asking price. You sit low and the centre console is high, while quality feels superb.

It is fitted with the latest version of BMW’s iDrive infotainment system. The big change is a revised home page; previous BMWs display a series of large icons for the major functions, but the 8 Series shows these as shortcuts on a sidebar, opening the space up for a choice of customisable tiles with the major functions. It’s such a slick system that the absence of Android Auto compatibility is only slightly irritating.

The instruments are displayed on a 12.3-inch screen that, while it looks sharper than that in a 7 Series, still isn’t as pretty as Audi’s Virtual Cockpit. BMW’s gesture control has been tweaked, too, to the point where it’s almost no longer a gimmick. 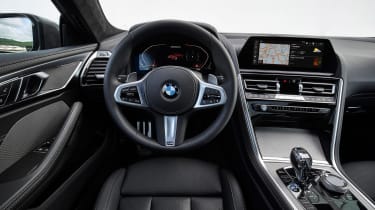 Once on the move, it doesn’t take long to realise that the 8 Series easily covers the ‘comfy GT’ side of the brief. The cabin is hushed and the ride is very smooth. It can occasionally feel crashy over potholes and drain covers, but otherwise it’s a peaceful drive.

All models get a slick eight-speed automatic transmission. This box is mated to a choice of one petrol and one diesel engine from launch. Eventually a hot M8 will join the range – likely using the same engine as the current M5 – but for now the range kicks off with the 840d: a 3.0 straight-six offering up 316bhp and 680Nm.

The M850i xDrive we’re testing here has a 523bhp 4.4-litre V8 with 750Nm. It feels every bit as fast as the 3.7-second 0-62mph time suggests, hurling the car forward at a stunning rate. It’s accompanied by a menacing roar, with suitable pops and bangs from the exhaust in Sport mode.

Push on, and the M850i remains composed. There’s very little body roll, huge grip, and the four-wheel-drive system puts down the power easily.

As impressive as it is, there’s no disguising the significant mass that’s being moved around. So, the 8 Series misses the ultimate sharpness of its sportiest rivals. A natural-feeling four-wheel-steering system disguises the heft when you’re cruising, though.

When it comes to the sensible stuff, however, the 8 Series is a little bit hit and miss. The boot is huge, but comes at the expense of rear-seat space.