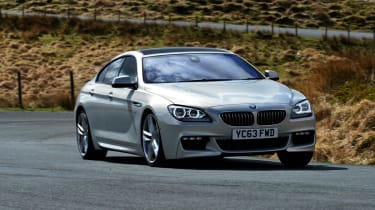 The BMW 6 Series Gran Coupe is BMW’s first direct rival to the Mercedes CLS, although the Mercedes has been around for longer.

A stretched version of the 6 Series Coupe that straddles the 5 and 7 Series line-ups, the classy Gran Coupe is one of the most desirable cars in BMW’s range, while the 309bhp 3.0-litre diesel is a gem of an engine.

It uses the same platform as the 6 Series Coupe, but stretched by 113mm, to allow lots of rear legroom and a decent-sized boot with the rear seats folded down. Handling is impressive for such a large car – although you’ll have to spend on options if you want to get the most from the chassis. Petrol choices include the V8 650i and six-cylinder 640i, while the bestseller in the UK will be the 640d.

On the road, it never feels anything other than incredibly fast. Petrol-like in its character, the diesel revs quickly and feels livelier than its rivals – especially with the Drive Performance Control system in its Sport setting, which gives you a positive throttle response. 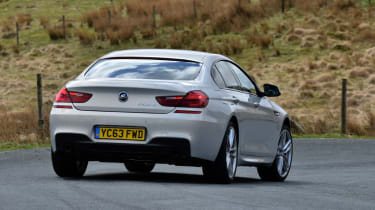 The diesel has a gentle hum at idle and an almost petrol-like growl under load, but at a steady cruise the straight-six is virtually silent, while wind noise is almost non-existent.

The steering is quick and accurate and there’s lots of grip on offer, meaning it’s easy to place in corners. And despite the car’s muscular torque output, the stability control was rarely troubled on the dry tarmac.When it comes to ride quality, the BMW is pretty compliant in the Comfort settings, but big 20-inch wheels and lower-profile tyres mean it’s a fraction more rigid over rough surfaces than the Porsche Panamera.

The 316bhp 640i is a cracking engine that revs freely and makes a fantastic noise, while the 444bhp 650i, with its 4.4-litre turbo V8, is ferociously quick. But the 640d trumps them both by delivering a storming 0-62mph time of 5.4 seconds, and superb fuel economy. Peak torque arrives at 1,500rpm, meaning the car punches out of corners with a verve that belies its size and weight.

All engines come with stop-start and BMW’s eight-speed automatic transmission. The results are astonishing with the 640d returning economy of 50.4mpg and CO2 emissions of 148g/km, while still covering 0-62mph in 5.4 seconds.

Our experts predict a residual of 50.1 per cent, so the BMW will lose less of its value than the Quattroporte.

If you want a BMW that makes a bold statement, then the Gran Coupe is for you. It’s one of the best looking cars the brand builds and is far more elegant than the awkward Maserati Quattroporte and heavy-handed Porsche Panamera.

The quad headlamp layout and double kidney grille are traditional BMW, but the flowing roofline, curved flanks and tapered tail gel really nicely to give the 6 Series stunning lines from behind and in profile.Its detailing is beautiful, too.

There’s a Gran Coupe logo in the shut panel of the C-pillar, while the graceful chrome flashes in the front wings hark back to classic BMW roadsters, like the fifties 507. Opting for M Sport trim adds a bodykit that gives you a hint of M6, too.

The classy design continues inside where BMW successfully blends hi-tech gadgets, top-spec materials and a stylish layout. The fantastic 10.2-inch central screen works well with the latest iDrive control system, while all the switchgear and dials are first-rate.

For a big car, the Gran Coupe doesn’t provide a lot of interior space. It’s fine up front where there’s a decent amount of room for the passenger and a very comfortable driving position. However, there’s less legroom for back seat passengers than in rivals. 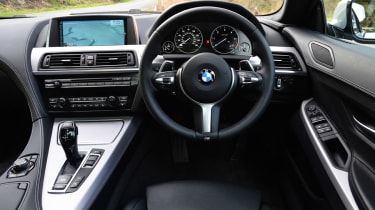 The large front seats pinch some of this space, while the sloping roofline compounds the sensation of being a little cramped – however, it could be that our car’s optional glass sunroof exaggerated the feeling of claustrophobia. You get three rear seatbelts, but the middle ‘jump seat’ won't be comfortable on long journeys.

Think of the Gran Coupe as a very spacious coupe and it makes more sense, and there’s a reasonable amount of luggage space. The 460-litre boot has the edge over the Porsche Panamera, and you get 60:40 split folding as standard, which is handy for long loads.

As you’d expect from BMW, the 6 Series comes with run-flat tyres as standard, while floor mats and Isofix are also included.

BMW finished 10th in the manufacturer ranking of our Driver Power 2014 survey, underpinning its decent reputation for reliability. The 6 Series has been on sale for a while now, so any early niggles should have been resolved and the diesel engine is tried and tested in other cars in the line-up.