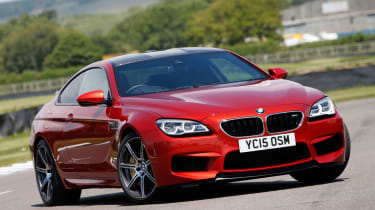 The BMW M6 is a snarling V8 GT car, which has as much in common with old-school muscle cars as it does with modern-day supercars - but it’s great to drive and mind-bogglingly fast in a straight line.

With 567bhp and 680Nm of torque, the M6 sits at the top of the BMW 6 Series range. It’s available as a coupe, a convertible and even as a four-door Gran Coupe. It uses the running gear from an M5, and sends all its power through an eight-speed twin-clutch gearbox to the rear wheels.

True rivals are few and far between, but the M6 goes up against sports cars like the Jaguar F-Type R, Porsche 911 and Mercedes SL. It’s bigger and more practical than all three, with four decent-sized seats and a 460-litre boot.

At the start of 2015, BMW tweaked the entire 6 Series range with a series of minor cosmetic tweaks and some extra standard kit. It also introduced an uprated Competition Package, which for £7,300 adds stiffer suspension, quicker steering and 25 extra brake horse power.

The BMW is a bit of a brute. It is alarmingly fast in all situations, yet thanks to the standard-fit adaptive dampers, can double as a comfortable cruiser as well as an out-and-out sports car.

Standard cars get a whopping 552bhp, but for an extra £7,300 you can opt for the Performance Package, which ups power to 592bhp - allowing the M6 to accelerate from 0-62mph in just 3.9 seconds. That’s faster than most Porsche 911s, and almost as quick as a Ferrari California T. The Competition Package also adds stiffer springs, dampers and anti-roll bars as well as recalibrate steering and an active M differential for better traction. 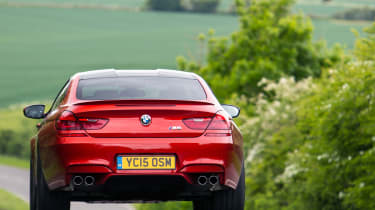 That said, all M6 models will light up their rear tyres if provoked. In our experience, it’s not impossible to get wheelspin at 70mph in fourth gear. The 680Nm of torque (700Nm in the Competition Package car) provides electrifying performance at any speed, in any gear.

The eight-speed dual-clutch gearbox is a joy to use, too. The crisp shifts are super-fast, and it’ll shift multiple cogs in quick succession if you ask it to. There’s a button on the dash that adjusts the severity of the shifts, as well as another that controls the responsiveness of the throttle, steering weight and damper stiffness. All this allows you to set your M6 up just how you like it.

You don’t buy a car like the BMW M6 and expect it to be cheap to run. Everything from fuel to road tax, through to tyres and maintenance will cost a small fortune - so you’ll need deep pockets if you want to run one every day.

The 4.4-litre V8 engine will return 28.5mpg and emit 231g/km of CO2 - meaning you’ll soon be on first name terms with your local filling station. Those wanting ultimate outright performance won’t pay the price at the pumps, though, as the Competition Package car boasts identical running costs.

The M6 falls into the top Group 50 insurance bracket, meaning more big bills regardless of where you live. Fixed-price servicing makes it easy to budget for maintenance, but super car performance means super car spare parts. Beware - a spare tyre on an M6 could easily cost upwards of £300.

The BMW M6 looks much like any other 6 Series model, albeit one injected with steroids for a more aggressive, sporty look. Available as a Coupe, Convertible and four-door Gran Coupe saloon, all models get a deep front bumper, flared arches and quad exhausts. 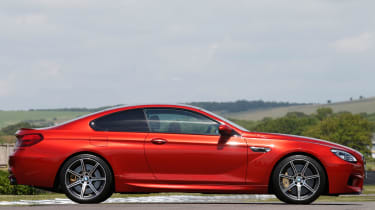 It’s actually a very luxurious place to sit - but so it should be for £90,000. Sat-nav is included, as is a high-quality Harmon Kardon surround sound system. All cars also get a DAB radio, BMW eCall system and heated front seats.

Despite its coupe bodystyle and sloping roofline, the BMW M6 is actually surprisingly practical. It’s got a 460-litre - just 20-litres shy of the 3 Series saloon - and inside there’s enough room for four to travel in relative comfort. 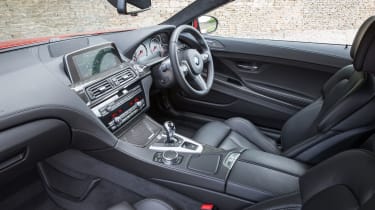 Granted, there’s more room in an Audi RS7 Sportback, but if space is key, you should take a look at BMW’s very own M6 Gran Coupe. There’s more room in the back and if you fold the rear seats flat you’ll free up a maximum 1,265-litre load bay.

The M6 can be specced with keyless entry (£695), plus a reversing camera (£330) and surround view camera (£530), both of which make manoeuvring a car of this size a little easier.

Due to its exclusivity, the BMW M6 (and 6 Series on which it is based) doesn’t feature in the 2015 Auto Express Driver Power survey. However, the BMW 5 Series with which it shares many of its parts – came 47th out of 200 cars. That’s a top 25 per cent finish, with the 5er praised for its performance, build quality, ease of driving and in-car tech.

Overall, BMW finished in 14th place – representing a four place fall over the previous year. That puts it one place behind Audi and three behind Merc, which is something it’ll hope to better in 2016. 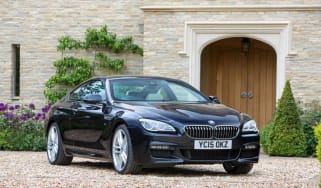 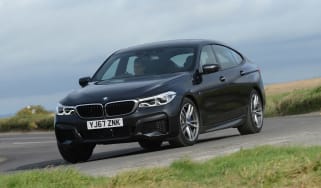 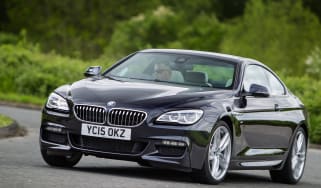 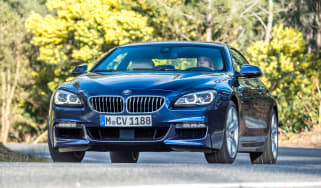 Revised coupe impresses on the road, but the 650i is expensive
BMW 640d Gran Coupe vs rivals 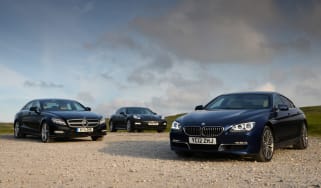 BMW has launched its own CLS rival, but can the 6 Series Gran Coupe beat Mercedes and Porsche?
BMW 640d Gran Coupe 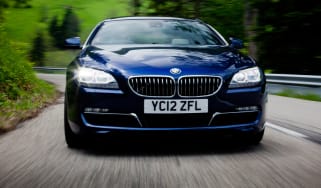 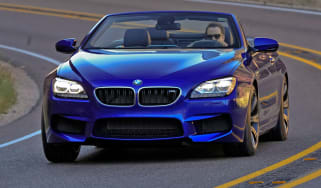 With an engine from the M5 and aggressive styling, can the new M6 Convertible blow us away?
BMW 640i Gran Coupe 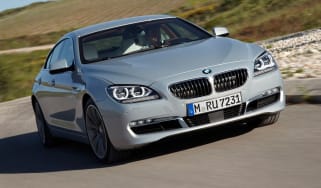 We loved the diesel-powered BMW 6 Series Gran Coupe, so how does the petrol version compare?
BMW 640d Gran Coupe 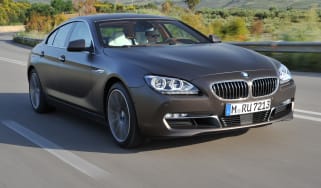 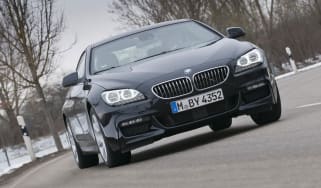 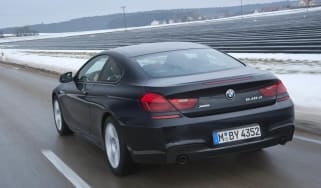 BMW has revealed a four-wheel drive, diesel-powered 6 Series – but it won't be coming to the UK
BMW 6 Series vs M635 CSi 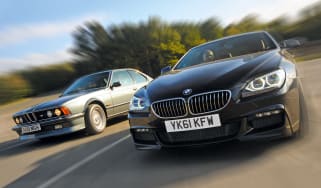 BMW says its new 640d will be the best-selling 6 Series ever. How does it match up against legendary eighties M635 CSi?
BMW 640i 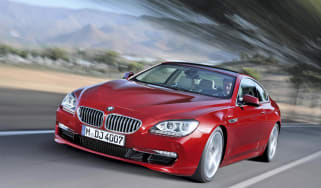 All-new two-door is gunning for Jaguar and Audi rivals. We take the wheel
BMW 6 Series Convertible vs Jaguar XK 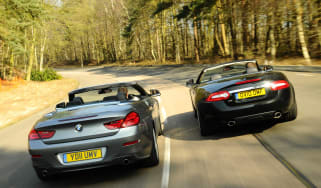 We Brits love our drop-tops, and BMW’s new 6-Series Convertible looks set to be one of the summer’s hottest buys. But can it beat the Jaguar XK?
BMW 640i Convertible 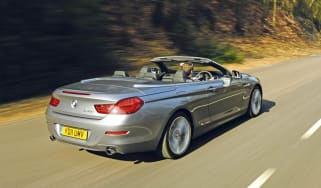 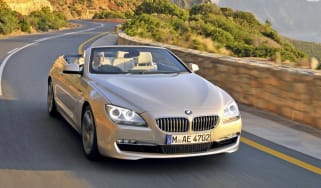 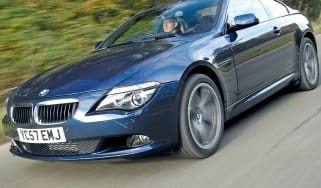 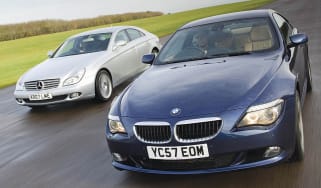 BMW has finally added a diesel to the 6-Series range. We compare it to the oil-burning CLS to see which makes the better grand tourer.
BMW 6 Series Coupe (2003-2010) review 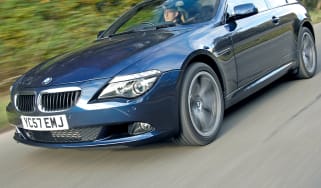 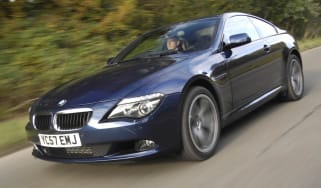 The 6-Series is the first luxury coupé with a diesel engine. Find out how it performs here.
BMW 6-Series coupe 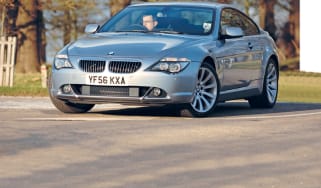 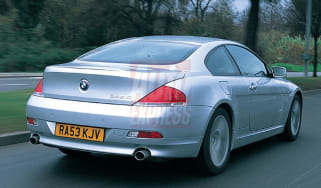 With flights to Europe costing as little as £1, travelling has never been so affordable. But a long time before budget airlines came along, the proper…
Skip to HeaderSkip to Content