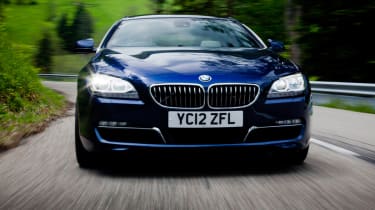 The 6 Series Gran Coupe is a beautiful thing – the best- looking BMW for some time and the company’s next best car after the new 3 Series. It’s not cheap, though: the price tag puts it directly up against the Porsche Panamera. But in 640d form, this stunning BMW makes a great case for itself thanks to incredible performance, brilliant fuel economy and great comfort.

BMW bills the 6 Series Gran Coupe as a GT car with some rear doors, rather than a saloon with a coupe body like the Audi A7 and Mercedes CLS. So it’s fitting we were able to test the grand tourer capabilities of a UK version of the car on an extended test drive of more than 700 miles.
Our route took in some demanding twisty mountain passes in France, Germany’s billiard table-smooth derestricted autobahns and the lumpy, battered tarmac of the UK.
And to spare you the suspense: the 6 Series Gran Coupe tackled each with aplomb. But more about that later.
First we need talk about the idea behind this car. BMW used the 6 Series as a starting point, rather than the lesser 5 Series, to make it more of a direct rival to the Porsche Panamera than the A7 or CLS.

If this doesn’t convince you, then maybe the £61,000 starting price will. Thankfully, you can appreciate where the £10,000-plus premium over an equivalent Mercedes and Audi has been spent, because inside the Gran Coupe offers sufficient luxury to rival that of the big Porsche.
And while rear space isn’t as generous as in the Panamera, the fact the Gran Coupe is 113mm longer than the normal 6 Series means there’s still sufficient head and legroom for adults.
In fact, BMW bills the car as a 4+1-seater. You can just about fit a small person in the middle of the back seats, although they have to sit with their legs straddling the transmission tunnel. We found the only real benefit of the set-up is this: because there’s no central divider, you can lie down in the back for a power nap – handy when you’re crossing a continent.
Our test car was the 640d, which will account for 80 per cent of sales. It’s easy to see why. The engine is simply epic: incredibly efficient, surprisingly tuneful and hugely powerful. The car does 0-62mph in 5.4 seconds, which makes a Panamera diesel seem lethargic and even leaves the V8 petrol Porsche trailing.
Yet the BMW’s twin-turbo 3.0-litre diesel has the CO2 emissions of a small family hatchback and will return
almost 50mpg. On our test, the trip computer showed an average 35mpg... but we did take the car to the limit on the autobahn.
And as you sit with the throttle buried in the carpet and the diesel chomping at the bit of its 155mph speed limiter, you appreciate what a stable, quiet and smooth long-distance cruiser this car is.
It’s also at home on a twisty mountain pass, where the precise steering, impressive grip and quick-changing eight-speed automatic gearbox make for fun as well as swift progress. There is one issue, though.
For the 6 Gran Coupe to perform as well as it can, you need the £3,400 Adaptive Drive package. Considering the high starting price, this should be standard. It not only keeps the car completely flat through corners, but also allows you to alter the stiffness of the suspension between various settings, with Comfort+ the most valuable mode for UK driving as it gives the Gran Coupe the ability to glide over even the worst bumps.
And so after more than 700 miles and 12 hours at the wheel, we arrived in London feeling fresh. We were glad to climb out of the driver’s seat only to appreciate again arguably the Gran Coupe’s best feature: its stunning styling.