Styling tweaks inside and out, plus efficiency gains, give BMW's mighty 640d grand tourer a mid-life boost

Revisions to the BMW 6 Series aren’t that obvious - the most noticeable are the new digital dials which won’t be to everyone’s taste. Overall though the changes do add up to marginally enhance the appeal of what was already a great car that’s best sampled with the highly impressive 3.0-litre diesel.

BMW added some intrigue to the launch of the revised 6 Series. Before we got behind the wheel, it announced we’d be driving the new LCI version of the coupe. So would the car benefit from something really exciting such as Lightweight Chassis Innovation or Larger Combustion Injection? Or perhaps it has a Low Carbon Impact?

Turns out LCI means Life Cycle Impulse which is BMW-speak for a mid-life facelift. And as facelifts go, they’re pretty are rather minor on the 6 Series – especially when compared to the radical updates which have just revolutionised the 1 Series. So what are they? Well there’s some external styling tweaks which include revised bumpers front and rear, full LED headlamps as standard, new door mirrors, wider exhausts, fresh alloy wheel designs and a few new colours. But really, unless you parked the facelift 6 Series next to its predecessor, you’d be hard pushed to notice things had changed. 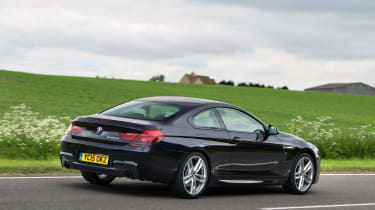 Inside, however, the upgrades are slightly more noticeable. A leather dash is now standard on all models, and this helps to enhance the car’s luxury feel. BMW’s ConnectedDrive is bundled in too, which includes an in-built subscription-free mobile sim card so the car can automatically alert the emergency services in the event of an accident. However, the most radical revision is the new fully digital driver display.

When you change the car’s mode between Eco-Pro, Comfort and Sport both the colour and the design of the dials changes. The display is very crisp and actually easier to read than the analogue type used on the old car, though in some ways we’d can’t help but feel some of the graphics used are a little too Playstation in such a mature and grown up car. 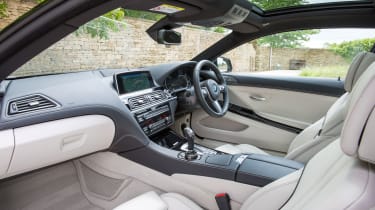 In fact, the 6 Series has always been the sensible man’s coupe especially in the 640d flavour of our test car. Small wonder then BMW has done very little to the way it drives. The engine has been made Euro-6 emissions compliant and there are mild efficiency gains, though you’ll probably feel no real difference at the pumps. Still 52.3mpg and 143g/km are incredible considering the power on offer.

With 309bhp on tap the 3.0-litre diesel engine is a seriously strong performer – and it even makes a pleasant noise as fake engine sounds are played through the stereo speakers so you don’t notice the diesel rattle. Also the hugely flexible nature of the engine’s delivery means you just short shift through the super-slick eight speed automatic gearbox riding the relentless tide of torque to. This relaxed nature really suits the 6 Series’ chassis set up – but don’t expect Porsche 911 levels of poise, delicacy and involvement.

Take the car for what it is though – which is a surefooted, supremely comfy, effortlessly fast, surprisingly economical and very luxurious GT car – and the BMW 640d is hard to fault; even if the mid-life updates aren’t that spectacular.