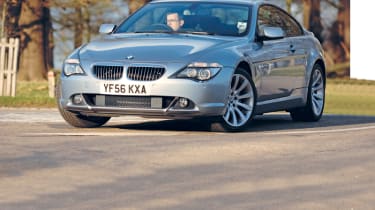 The 650i is our pick of the 6-Series line-up. While it doesn’t have the manic performance and aggressive looks of BMW’s top-of-the-range M6, the super-smooth and tuneful V8 engine under the bonnet enables the newcomer to provide a wonderful blend of performance and comfort in an understated package. Carrying a price premium of £5,620 over the 630i, it neatly fills the gap between the six-cylinder car and the V10 M6.

The all-new X5 is grabbing the headlines, but the 4.8-litre V8 engine that stars in the SUV’s engine line-up also sees action in the 5 and 6-Series.

Under the bonnet of the svelte coupé, the powerplant is tweaked to deliver a thunderous 362bhp. Badged 650i, the V8 model bridges the gap in the 6-Series range between the flagship 507bhp V10-powered M6 and the 254bhp six-cylinder 630i.

Press the standard start-stop button, and the V8 hums into life. Impressively refined at idle and through the revs, the powerplant fills the role of both relaxed cruiser and gutsy performance engine. At any speed it provides strong pace in an effortless manner.

BMW’s engineers have fitted a six-speed manual gearbox as standard, rather than a lazy automatic, so the 650i is a proper driver’s car. The Sport model has 19-inch alloys, plus an M-branded steering wheel and gearlever.

With the optional Dynamic Drive active roll bars delivering excellent body control and the V8 offering such a spread of usable performance, the 650i is a tremendous all-round performance machine.

Sharp handling, strong brakes and involving dynamics mean it combines great driver involvement with superb comfort. As with all 6-Series models, the 650i has a revised version of BMW’s iDrive cabin control system, along with rear seats that provide more room than those in key rivals such as the Jaguar XK.

Plenty of hi-tech toys are available on the options list, but even without the gadgets, it’s the old-fashioned basics of a smooth, powerful engine and traditional rear-drive handling that make the 650i stand out.