Excellent engine and package prove that diesel GTs can work. 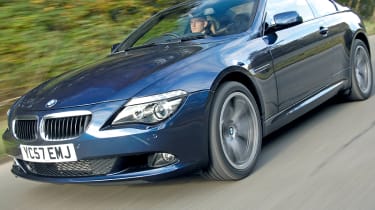 Driving The 635d has a straight-six twin-turbo 3.0-litre turbodiesel that’s hard to fault. It offers even more torque than the V10 M6, and there’s no arguing with 0-60mph in a mighty 5.7 seconds. On the road, it feels extremely fast, especially in kickdown. However, it’s the effortless nature with which it gains speed that really impresses, while the engine remains unruffled even when pushed hard. Through corners, the BMW continues to impress. There’s lots of grip, the steering has good feedback and it remains composed. However, this involvement does lead to a firm ride and a surprising amount of road noise. It’s not comfortable enough to be a true GT.

Marketplace The diesel 6-Series is a take on the two-door, 2+2 luxury coupe that BMW expects to account for three-quarters of UK sales. It’s a significant car alright. It was launched in 2007, along with a facelift for the entire 6-Series range. Now the controversy over the car’s styling has worn off, it’s easy to appreciate what an aggressive, distinctive-looking machine it is. This visual impact is likely to appeal to younger buyers. The 635d is available in both coupe and convertible guise, with a choice of two trims – standard and Sport, the latter offering more focused suspension, larger wheels and delectable sports seats. There currently isn’t a premium two-door diesel rival, but Mercedes offers the four-door coupe CLS in diesel guise, and there are also oil-burning versions of the cheaper Audi A5. No Jaguar XK diesel yet, though.

Owning Like all BMW models, build quality is immaculate, but there are grips. There’s a lack of stowage, and the iDrive control system is fiddly – though eight programmable buttons do make things easier. The 635d is well suited to accommodating two people as well – the cabin is spacious up front and the electrically adjustable, figure-hugging seats of the Sport model offer excellent support and comfort. However, the two-door body means access to the rear is tricky, and the seats themselves are cramped. The BMW is also expensive, as are options – so it’s a good job retained values are rated at well over 50 per cent. It’s also economical, as you would expect from a diesel. Even during testing, it averaged over 30mpg, with 37mpg potential on a cruise.