Luxury GT is enhanced by a superb diesel engine 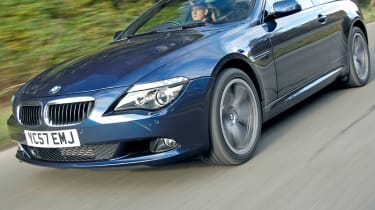 Driving The big 6-Series is a beefy GT that boasts some impressive technology. The entry-level 3.0-litre petrol straight-six has high precision fuel injection, while the 4.8-litre V8 is very advanced and punches out a hefty 362bhp. It perfectly fills the 6-Series brief of being relaxed cruiser and gusty performer. There’s also the racecar-inspired 507bhp M6. But it’s the 3.0-litre twin-turbo diesel, which joined the line-up in 2007, that’s the real star. It pulls like a train from 1,500rpm, never loses its composure and is marvellously refined. 60mph arrives in little more than six seconds, and it’s all driven through a superb six-speed automatic. A traditional rear-drive platform serves up sharp handling, strong brakes and involving dynamics, meaning the 6 is fun to drive too, particularly with the optional hi-tech anti-roll ‘Dynamic Drive’. However, the ride is firm and there’s rather a lot of road noise if you choose the larger alloy wheel options.

Marketplace The 6-Series received a minor facelift in 2007; the headlights and bumpers were subtly refashioned, while that controversial rear was reprofiled as well. This luxury grand-touring model is available in both Coupe and Convertible guise – the latter with a traditional fabric roof, complete with innovative electric drop-down rear glass. Both are genuine four-seaters, and offer a ‘muscular’ alternative to a Porsche 911, Mercedes SL and Jaguar XK. There are two trim lines – regular and Sport – plus a fulsome options list. The 630i, 650i, 635d and M6 variants are offered in both body styles. BMW is the first manufacturer to produce an upmarket diesel coupe, and as it’s the best car in the 6-Series range, deserves praise for doing so.

Owning 2007’s restyle also saw the centre console modified, with an overhaul for the iDrive control system. It’s easier to use, but stowage space still remains at a premium. However, there is no faulting the seats, driving position or overall feeling of quality. The refined performance is pleasing too, with even the Convertible proving hushed with the roof down, thanks to some clever features. This is also a GT that you really can use to cross continents, courtesy of its decent boot. But while prices are GT-level, too (and that’s before you factor in options prices), the 6-Series does offer one real bonus: superb fuel economy. The diesel in particular is remarkable, for it can average nearly 41mpg on the combined cycle – despite its searing performance! This is a staggering result, and should help bolster the 6-Series’ already impressive retained values.