The 6-Series is the first luxury coupé with a diesel engine. Find out how it performs here. 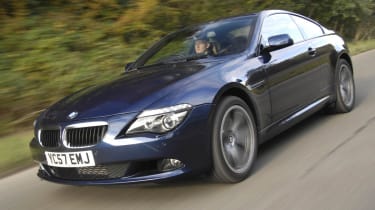 The 635d is undoubtedly the best car in the 6-Series range, delivering a blend of power and economy that the petrol-powered variants can only dream of. But although engine noise is muted, the firm ride spoils the car’s claim to be a luxury cruiser in the same vein as the Jaguar XK. Nevertheless, BMW deserves praise for being first to market with an upmarket diesel coupé.

But why has it taken so long? Well, with a top-selling V8 powerplant, plus a high-performance M6 and an entry-level 3.0-litre petrol variant already available, creating a 635d wasn’t high on BMW’s priority list.

However, as this unit is expected to account for 70 per cent of 6-Series sales in the UK, the brand must be kicking itself that it didn’t develop the top-end diesel coupé earlier.

Given the praise we’ve previously heaped on this engine, it won’t come as any surprise to learn it has the same impressive blend of power and economy here, with a 0-60mph time of a little more than six seconds and a combined fuel figure of nearly 41mpg. It pulls like a train from 1,500rpm, never loses its composure and, thanks to superb noise insu­lation, is marginally quieter and smoother than in the 5-Series.

The 635d’s six-speed automatic gearbox first appeared in the 5-Series earlier this year. Here, however, it has a unique shifter with very neatly integrated buttons. It’s good to use and will find its way into the executive saloon in due course. As well as standard paddleshift levers, a Sport button that shortens shift times is also included in the set-up.

Selecting Sport mode sharpens the throttle response and Servotronic steering, making the 6-Series feel even more stable and secure when cornering. The trouble is the 635d isn’t soothing enough to be a genuine GT. It has a firm ride and there’s a surprising amount of road noise, but that could be down to the new optional 19-inch wheels with run-flat tyres that were fitted to our car.

The revised alloys aren’t the only alteration made to the 6-Series, as it also features a new-look bootlid with integrated spoiler and brake light. Inside, the cabin architecture isn’t to all tastes, with a lack of storage being our chief complaint. However, there is no faulting the seats, driving position or overall feeling of quality.

Prices for the new model start at £53,910, to which the Sport variant adds a further £2,200. That’s a lot of money. Nevertheless, the promise of superb real-world performance, along with excellent economy and a CO2 emissions figure of 183g/km should attract green-minded buyers in this sector. What’s more, for £5,690 over the cost of the equivalent hard-top, BMW is also offering this powerplant in the 6-Series convertible.

Rival: Mercedes CLS320 CDI While it’s not strictly a two-door coupé, Mercedes’ ultra-stylish CLS is also available with a strong diesel. The 224bhp 3.0-litre V6 isn’t as powerful, clean (200g/km) or efficient (37.2mpg) as the BMW, but it is significantly cheaper, costing £43,957.