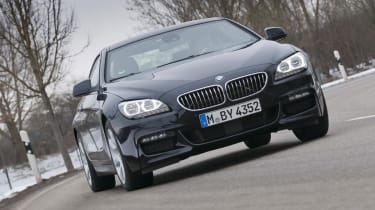 The new BMW 640d xDrive builds on the rear-wheel-drive 640d’s already impressive strengths. Like that car, it’s comfortable, extremely fast, very efficient and well equipped. The four-wheel-drive transmission gives it even more grip, poise and stability in tricky conditions, so there’s not much that will faze it. The only downside for UK buyers is that there’s no chance of this model being sold here, as the four-wheel-drive system cannot be fitted to right-hand-drive cars.

The new BMW 640d xDrive Coupe shows that Audi and Porsche aren't the only car makers offering sleek two-doors with impressive performance and four-wheel grip. It features one of BMW’s renowned diesel engines combined with the company’s xDrive electronically controlled all-wheel-drive transmission.
While this model shares the rear-wheel-drive 640d's 3.0-litre turbocharged diesel engine, with a handy 313bhp and 630Nm of torque, the all-wheel-drive system further boosts your confidence in the car’s abilities. Its limit of grip is far beyond the reach of any sensible driver on a public road, so it inspires huge confidence in mixed wet/dry conditions.
Even on 18-inch Dunlop winter tyres, the car feels very sure-footed. The xDrive calculates which wheels to send power to before electronic stability control is even needed, so you hardly notice the seamless operation. From a standing start, there’s no wheelspin or pull on the steering – just a wave of torque as the car sprints from 0-62mph in 5.7 seconds, despite weighing 1.8 tonnes. Yet it never feels heavy – and certainly not heavier than the rear-wheel-drive version.
It does occasionally squirm under braking, but overall the car’s grip and balance give it a level of agility that belies its mass. It’s also extremely refined for a diesel car, and it sounds fantastic when you're accelerating hard on the motorway or attacking a twisty road.
Inside, you’ll find the regular 640d interior, with a luxurious dash, firm leather steering wheel and the iDrive infotainment system. The well padded yet supportive driver’s seat can be adjusted to a low-down driving position, and while headroom is limited for taller occupants, it's otherwise very comfortable up front.
On top of all this, the 640d xDrive returns 48.7mpg fuel economy and emits only 153g/km of CO2. So it’s not surprising that the rear-wheel-drive version of this car makes up 90 per cent of all 6 Series sales in the UK. But the xDrive system has not been engineered for right-hand-drive, so sadly this four-wheel-drive model won't make it to these shores.