All-new two-door is gunning for Jaguar and Audi rivals. We take the wheel 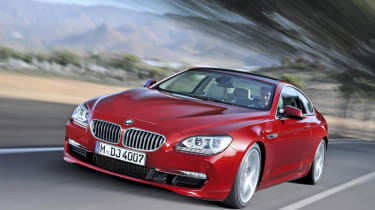 You can get handsome styling, impressive performance and a premium badge for less with the £42,965 Audi S5. But look past the 640i’s price tag, and it’s a tempting package. Not only is it extremely good looking, fast and fun to drive – as you would expect – it’s also surprisingly economical. In the UK, most 640i models will be specified with BMW’s M Sport package, which adds another £4,665 to the price, but brings 19-inch wheels, a mild bodykit, sports seats and M Sport steering wheel.

If you want more grace from your two-door BMW, the new 6 Series Coupé could be the solution.
It’s the German company’s answer to fast, muscular two-doors such as the Jaguar XK and Audi S5. And while it may seem strange that bosses opted to release the Convertible version first, the move allowed the drop-top to hit dealers in time for the summer, and maximise sales.
*See the BMW 6-Series Coupe in action below*
[[{"type":"media","view_mode":"content_narrow","fid":"69334","attributes":{"alt":"","class":"media-image"}}]]
Now, the Coupé is here, and aside from the fixed roof, there’s not much to set it apart from its fabric-hooded brother visually. The long nose, sleek lines and slender, hockey stick-style

tail-lights are still there, while the raked rear screen gives the hard-top an extra dose of understated style. But the newcomer sits 5mm lower than that of the previous 6 Series, for a more aggressive appearance.
The wheelbase is 75mm longer, and the new model is 39mm wider. While this doesn’t sound like much of an increase, it translates to a surprising amount of space, and means there’s room for two adults in the rear. The boot is also vast for a 2+2, with 460 litres of luggage space.
Inside, there’s thick leather trim and smooth aluminium.
The switchgear is of typically fine quality, but it’s also tough and uncluttered, while the swirling pillared section – where the dashboard meets the centre console – provides a touch more style than BMW’s usual classy but utilitarian cabins.
Three versions are available.
The entry-level 640i features a 316bhp 3.0-litre straight six-cylinder turbocharged engine, the flagship 650i gets a meaty 401bhp 4.4-litre V8 while there will be a 640d diesel too.
We drove the former, and it’s a powerful, impressive and extremely smooth machine. This time, the company has employed its latest TwinPower Turbo to boost torque, which reaches its peak at 1,300rpm. However, the full 450Nm is available all the way up to 4,500rpm, so there’s an incredible amount of pulling power. This is spelled out by the acceleration figures; BMW claims the sprint from 0-62mph takes only 5.4 seconds, and it feels every bit as fast as that.
Although we’ll have to wait a few months to drive the 650i, our experience of the Convertible version tells us it will be richer and more urgent in its power delivery, with a pleasing growl. The V8’s lazy nature will allow this version to make light work of motorways – although the six-cylinder 640i is hardly stressed at high speed. In fact, it’s an ideal long-distance companion.
Despite its size and sheer road presence, the 6 Series is lithe and engaging. BMW’s long-standing reputation for producing entertaining rear-wheel-drive cars shines through here. Body roll is kept to an absolute minimum, the fat tyres offer plenty of grip, and the communicative steering provides adequate feedback.
Cars fitted with the optional Adaptive Drive package allow the set-up to be adjusted towards comfort or sportiness. It softens or sharpens the suspension, accelerator pedal, steering and gearbox settings accordingly.
Although the ride is a little more hard-edged when the set-up is altered, it remains superbly composed whatever the road surface. The 640i also comes with the familiar eight-speed automatic transmission as standard – and it’s just as silky as the engine.
The box enhances fuel economy, too, the engine revving as low as possible in relaxed driving conditions. When you decide to up the pace, it makes the best of the heaps of torque on offer.
Together with a special new Eco Pro mode, which tweaks the gearbox settings further, the 640i is exceptionally clean and efficient for such a large, luxurious, petrol-engined grand tourer, returning 36.7mpg on the combined cycle and putting out 179g/km of CO2.
It all adds up to a hugely accomplished all-rounder.