With an engine from the M5 and aggressive styling, can the new M6 Convertible blow us away? 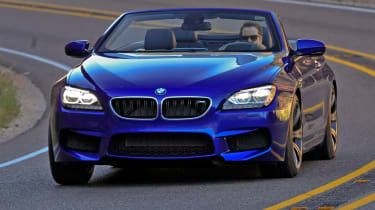 If you want a high-performance convertible, there’s plenty of choice. The M6 makes a strong case for itself, with aggressive looks, a storming engine and great handling. But a car like this should fill you with excitement every time you drive it, and the M6 doesn’t quite hit the spot. Yes, it’s the best-engineered car in its class, but the Jaguar XKR-S is more fun and a Maserati GranCabrio delivers more thrills.

The M6 has always been the black sheep of the BMW M family. Whereas cars like the M3 and M5 invented their own niches, the M6 was just another big, fast 2+2 coupé. But that doesn’t make the launch of an all-new model any less exciting – especially when there’s a 552bhp V8 under the bonnet.
In a break with tradition, BMW has chosen to launch the Convertible before the Coupe, and we travelled to California, where the sun shines for 300 days a year, to put it to the test.
The new model looks meaner than ever. An M6 badge has been added to the grille, while the front apron gets three gaping intakes and two ‘fangs’ to help direct cool air towards the engine. Swollen wheelarches accommodate the 30mm wider front track and 19-inch alloys (20-inch wheels are optional), the side sills stick out further and at the back there’s a more sculpted bumper to house the four exhausts.

Sit in the heavily contoured driving seat and you’re presented with a set of sporty dials and an all-new M-specific steering wheel, with three slender retro-looking spokes.
The V8 engine is the same 4.4-litre twin-turbo you’ll find in the M5. It’s capable of revving to 7,200rpm, but maximum torque arrives at only 1,500rpm. That gives it a very different character to its predecessor’s high-revving 507bhp V10, and it uses 30 per cent less fuel.
Floor it in any gear at 1,500rpm or above, and saving fuel will be the last thing on your mind. It feels as if you’re strapped to the front of a bullet train, and full-bore upshifts from the twin-clutch M DCT gearbox are so fast, there’s no break in acceleration.
Unlike the old M6, this engine doesn’t ask the driver to keep the revs high. It simply bullies the car down the road with a roar that’s complemented by coughs and bangs as gears change.
But an M car has to be more than a straight-line monster, and a huge array of settings lets you tailor the chassis. There are three modes each for the gearbox, hydraulic steering, throttle, suspension and traction control – as well as choosing between manual and auto for the gearbox. That’s 486 possible combinations, two of which can be stored on the buttons marked M1 and M2 on the wheel.
We found the best compromise came from dialling each to the middle ‘Sport’ setting – except for throttle response, which we preferred in ‘Sport Plus’. The suspension is supple enough to deal with most imperfections, body roll is minimal, the level of grip is huge and the steering gives plenty of feedback.
Even when we hit a bump mid-corner – something that normally causes a convertible’s chassis to flex and twist – the M6 stayed absolutely rigid and blasted out the other side. The Coupe will inevitably be a tiny bit lighter and sharper to drive, but the margin will be smaller than you’d expect.
So in every measurable sense, the M6 Convertible is brilliant – but somehow there’s some excitement missing. It feels too much like any other fast BMW to drive, and an M car should be something a little more.