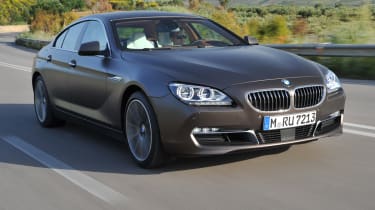 At only £1,820 more than the equivalent 640d Coupe, the Gran Coupe looks tempting. It has strong economy and pace, striking looks and a spacious interior. And it’s not just a fine cruiser; specify Adaptive Drive and it outhandles a Mercedes CLS. If a 7 Series is too sensible for you and a 6 Series too cramped, this car fits the bill.

Before the Mercedes CLS arrived in 2004, coupe styling and four-door practicality rarely went hand-in-hand. Since then, the Porsche Panamera and Audi A7 have followed suit, and now BMW has joined the party with the 6 Series Gran Coupe.
The formula for the Gran Coupe is simple. By stretching the 6 Series Coupe’s wheelbase and overall length by 113mm, the company has created space for an extra set of doors, more room in the back and a bigger boot.
The design is familiar, though, with the forward-leaning, kidney grille and shark-like nose lifted from the Coupe, while the stretched profile and low roofline look sporty in a car that’s over five metres long.
On the inside, the driver-orientated dash is also taken from the 6 Series Coupe and overall fit and finish is stunning – easily on a par with the A7.

BMW is selling the car as a 4+1, rather than a 2+2 Coupe, so a fifth occupant can straddle the centre console. Even so, rear legroom is generous and unlike in the Coupé the rear seats fold flat, taking boot space from 460 to 1,265 litres.
There’s a choice of three turbo engines, all with an eight-speed auto and stop-start as standard. But our 640d is set to make up at least 80 per cent of UK sales.
Performance is phenomenal: 0-62mph takes 5.4 seconds (the same as the 316bhp 640i, but five-tenths down on the 444bhp 650i), while the 309bhp six-cylinder diesel claims 50.4mpg (14.2mpg more than the 640i) and emits only 148g/km of CO2.
Pull away and the engine feels smooth and hushed, while the eight-speed box shuffles gears swiftly. Squeeze the throttle in any ratio at more than 1,500rpm, and acceleration is incredible, with a roar that sounds almost as good as the six-cylinder petrol’s.
Move up through the driving modes – ECO PRO, Comfort, Comfort+, Sport and Sport+ – and the responses of the box, steering, throttle and stability system get sharper. Sport+ is perfectly judged and fun on twisty roads, relaxing rear-wheel grip.
The Gran Coupe weighs around 70kg more than the equivalent two-door, but is still great to drive. The longer wheelbase improves the ride – it’s supple even in the dampers’ stiffest setting – while the optional Adaptive Drive uses active roll bars to keep the car flat in bends.
Also fitted to our 640d was Integral Active Steering: this turns the rear wheels as well as the fronts and works superbly to ensure crisp responses from the well weighted steering.
UK buyers can pick from SE and M Sport trims, with the latter hiking the price by £4,665. SE has leather trim, sat-nav, 18-inch alloys and heated seats; M Sport adds 19-inch lightweight wheels, a bodykit and sports seats. Buy the right options, and you’ll get a car that sets the new dynamic benchmark for the class.