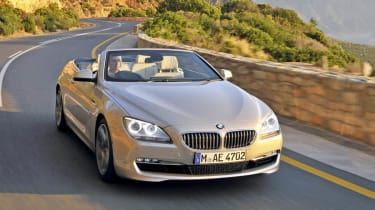 If a luxury cabrio’s job is to turn heads and make you feel good, then the new 6-Series scores top marks. With a body that’s far less controversial than its predecessor’s, even more space and a raft of hi-tech gizmos, it’s set to be a success. This range-topper packs a costly punch, so expect to see more 640i and 635d models on the road. We look forward to testing them, and the Coupé, very soon.

It’s open season on the 6-Series! Seven years after the original car arrived, BMW has launched an all-new version. While the Coupé and a four-door variant are set to go on sale later in the year, it’s the Convertible that’s available first, in good time for summer. And Auto Express drove it on South Africa’s sweeping coastal roads.
Engine choices will include the in-line six-cylinder 635d diesel and 640i petrol. However, we tried the range-topping 401bhp 4.4-litre twin-turbo V8 petrol 650i, which costs a whopping £73,430 and reaches dealers in April.
The car certainly looks good, and its styling is far less controversial than that of its Chris Bangle-designed predecessor. Its sleek lines work well to conceal the vast size – at 4.89m it’s 7.4cm longer and 4cm wider than before, but 1cm lower –  and with a forward-leaning kidney grille and set-back passenger compartment, it turns heads even if it’s not as pleasing to the eye as Jaguar’s XK Convertible.

The electric, triple-layered, fabric roof can be operated via either a centre console button or remotely from the key fob. It takes 20 seconds to open and 25 to close – operations which can be executed while on the move at up to 25mph. The upright, heated glass rear window is set directly behind the back seats, and can be lowered separately from the roof.
BMW claims the 6-Series’ torsional stiffness has increased by 50 per cent. Despite being bigger and with extra reinforcements to meet stricter US rollover rules (which add 70kg to the overall weight), the cabrio is only 20kg heavier than before.
This is thanks to plenty of aluminium and fibreglass composite components. Rear seat space is good for two small adults, and there’s room for 350 litres of luggage, too. Highlights up front include a new on-board monitor in the form of a freestanding seven-inch screen, plus a new-generation head-up display.
All 6-Series models have Drive Dynamic Control, which allows the driver to pick from three driving modes (Normal, Sport and Sport+). Optional Adaptive Drive lets you tweak the response of the dampers, engine, steering, traction control and eight-speed automatic box.
On the move, body stiffness is impressive, with no squeaks or rattles whether the roof is up or down. Over really big bumps the rear suspension can be quite harsh, but the car is generally very stable and offers plenty of traction. The steering set-up is well weighted and very direct, giving plenty of feedback, while the gearbox is fantastic: it shifts quickly and smoothly via the steering wheel-mounted paddles.
The twin-turbo V8 is the star of the show, though. Capable of pushing the car from 0-62mph in five seconds and on to 155mph, it’s a mighty powerplant. With 600Nm of torque – available from only 1,750rpm – there’s always a deep reserve  of urge, and it sounds fabulous, too, boasting a mean but smooth V8 rumble.
Thanks to Drive Dynamic Control and Adaptive Drive, you’ve got a highly capable sports car that’s able to cruise comfortably one minute, and behave like a sports car the next. And while it’s certainly not cheap, this new 6-Series is a hi-tech feast for the senses.
Rival: Jaguar XK Convertible
For sheer glamour, the 380bhp 5.0-litre V8 XK is hard to beat. It might not boast as much tech or space as the BMW, but it’s great to drive and hugely desirable.