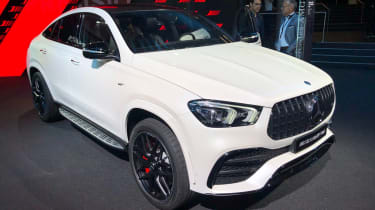 It has been announced that the new Mercedes GLE Coupe, first revealed at the 2019 Frankfurt Motor Show, will start from £72,530. Built in Merc’s Tuscaloosa, Alabama factory, it’s a more style-driven, slightly less practical alternative to the regular bodied GLE and takes the German firm’s SUV count up to eight separate models.

It grows in size compared to its predecessor, being 39mm longer at 4,939mm from bumper to bumper and now 2,010mm wide, sprouting just an extra 7mm widthways. Importantly though, the wheelbase grows 20mm for a bit of extra legroom, but from wheel to wheel it’s around 60mm shorter than the conventional GLE SUV.

Mercedes claims that shorter wheelbase goes some way to justifying the GLE Coupe, injecting a sportier look and feel to the model. That’s said, from the front the design is unchanged, using the brand’s latest family face and headlight signature. The windscreen is slightly flatter in order to meet the lower roofline, and it feeds into the rakish rear end, complete with new LED taillights, while the boot lid runs flush from the top of the window to the rear bumper. 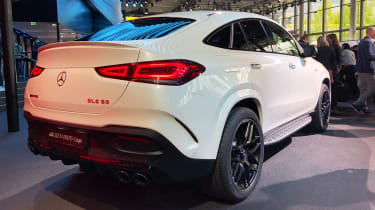 Mercedes claims that the boot itself sizes up at 655 litres with all seats in place. The back row can fold on a 40:20:40 split to open up a 1,790-litre load bay over two metres in length. Mercedes also claims that the loading sill now sits 60mm lower than before too.

The dashboard carries over from the GLE, using a two 12.3-inch displays to create a totally digitalised cockpit running the brand’s latest MBUX software with “Hey Mercedes” voice control. The centre console itself sits quite high, while grab handles give the GLE Coupe some traditional SUV interior touches. The rear quarter is styled around the slightly tighter packaging brought on by the rakish rear end, while Artico man-made leather upholstery is standard on all models.

As for engines, from launch the line-up will comprise of two six-cylinder diesels and a six-cylinder, petrol powered, 48-volt mild hybrid AMG performance model.

The base car for now is badged GLE 350 d, which is priced at £72,530. It uses a 268bhp 3.0-litre straight-six diesel developing 600Nm torque, while the same engine is also served up in the GLE 400 d, albeit uprated to 325bhp and 700Nm. As standard both these models ride on steel suspension but with the GLE’s freshly developed Airmatic air suspension on the options list.

The new AMG GLE 53 is slightly more expensive at £80,615. It makes use of a 429bhp 3.0-litre six-cylinder petrol engine with 48-volt mild-hybrid assistance, sending power to an all-wheel-drive system via a nine-speed automatic gearbox. It gets sportier styling inside and out, AMG derived air suspension as standard and is capable of full ‘lift off and coast’ running, 0-62mph in 5.3 seconds and a top speed of 155mph.

Do you like the look of the new Mercedes GLE Coupe? Let us know your thoughts in the comments below... 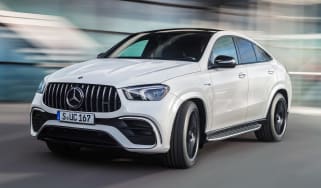 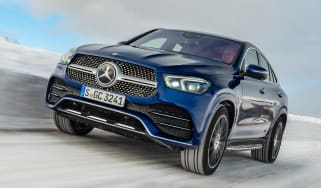 The Mercedes GLE 400 d Coupe is the latest SUV from Mercedes but does it offer anything extra over the standard GLE?
New Mercedes-AMG GLE 53 Coupe ride review 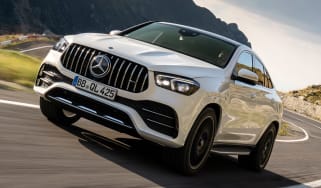