Mercedes announces prices for the new SLS AMG GT and Black Series starting at £165,030 for the GT 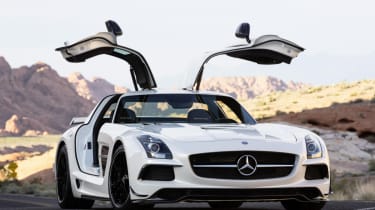 The price and specs of two new editions to the Mercedes SLS supercar range has been revealed. The Mercedes SLS AMG GT replaces the current Coupe and Roadster models adding more performance than before and an advanced specification too.

The 6.3-litre naturally aspirated V8 engine has been tweaked to offer 20bhp more - taking the total up to an astounding 583bhp and 650Nm of torque while the seven-speed AMG dual-clutch gearbox has been uprated to give more precise and responsive shifts. That translates to a 0-62mph time of just 3.7 seconds and an impressive 199mph top speed.

Starting at £165,030 for the coupe the SLS AMG GT also gets a new nappa leather and Alcantara steering wheel, a Bang & Olufsen stereo and unique two-tone alloy wheels and lettering along the boot lid.

Also joining the range is the new SLS AMG Black Series an extreme version of the road car inspired by the GT3 racecar. Extreme visual modifications include a carbon fibre reinforced plastic bonnet and aerodynamic body kit with a large rear wing for extra downforce.

Power jumps to 622bhp - making the Black Series the fastest and most powerful production car ever built by the AMG tuning division. Aggressive weight saving measures include carbon ceramic brakes all-round, a stripped back interior and titanium exhaust system which all mean that the Black Series tips the scales at 1,625kgs - a full kilos less than the standard car.

However this manic performance does come at a price and the SLS AMG Black Series starts at a hefty £229,935 on the road - similar to a Ferrari FF or Lamborghini Aventador hypercars. Both new versions of the SLS are available to order now.