Styling aside, there's nothing old-fashioned about the Morgan Aero 8 - it's fast, generously equipped, great fun to drive and extremely charming. 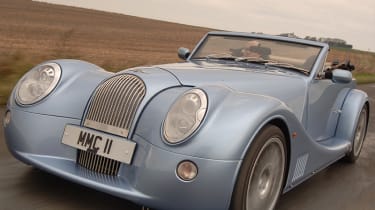 Driving: Don't be fooled by the retro looks - there's nothing old-fashioned about the way Morgan's range-topper drives. A tie-up with BMW means the model uses the latest 4.4-litre double VANOS Valvetronic V8, developing 325bhp and 448Nm of torque. It also features the six-speed manual transmission from the previous-generation M5. The aluminium Aero 8 tips the scales at only 1,145kg, meaning a 284bhp-per-tonne power-to-weight ratio. That's identical to the latest M6 supercoupe's, which gives you an idea of how fast this Morgan is - the claimed 0-60mph is less than 4.5 seconds. And even with its hi-tech V10, the top 6-Series doesn't sound as good or punch so hard at low revs as the Aero 8. Nor is it as involving; handling is the Morgan's trump card. The stiff chassis and superbly judged suspension mean the car is taut, agile, well balanced and surprisingly friendly to drive.

Marketplace: There's no mistaking the big Morgan! With flowing lines and oh-so distinctive detailing, it's every inch the modern reinterpretation of the classic Morgan shape. And with 2007's facelift, it became less controversial, too. The previous VW Beetle headlights were replaced with units from the MINI; the cross-eyed stare is beginning to face. Mounted further out on the front wings, the revised lights instantly make the Morgan less comical. Yet no-one can deny the dramatic styling retains all its head-turning ability - this Morgan isn't exactly subtle. Offered in a single V8 soft-top form at the moment, the range will soon be joined by the even more outrageous Aeromax coupe. And although it costs over £60,000, its performance, ability, cabin and sheer presence make this appear something of a bargain; Jaguar's slower XKR drop-top costs much more, and the BMW M6 Convertible adds a hefty amount on top of that.

Owning: Changes for 2007 didn't stop at the headlights. The roof mechanism was all-new, complete with a larger rear window for improved visibility, and the cabin grew by six inches, as the doors were pushed further out over the running boards - an alteration that also improved access. Don't think this means the rest of the interior is as straightforward as a supermini's, however. The steering wheel is mounted close to your chest, the seats are very narrow and the fly-off handbrake is buried down the transmission tunnel. On the plus side, full US type approval means the Aero 8 now has two airbags, not to mention cruise control, a tyre pressure monitor and a heated windscreen. Soundproofing was improved in 2007 and even Bentley could learn a lesson or two from Morgan's craftsmen - the wood and turned aluminium dash is a work of art. And though the famous waiting lists remain, the benefit is strong retained values! 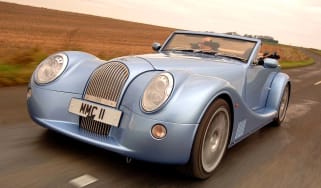