Firmly established as a manufacturer, Noble Moy Automotive has built up an impressive reputation for building sports cars that can take on the competition, and make them look a bit silly. 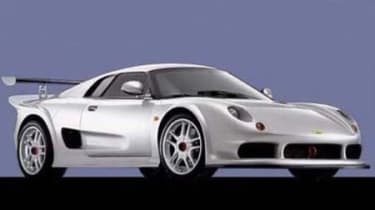 Firmly established as a manufacturer, Noble Moy Automotive has built up an impressive reputation for building sports cars that can take on the competition, and make them look a bit silly. The M10, of which only a handful were ever produced, bettered the Lotus Elise in all but looks. The latest star, the M12 GTO, is a more than worthy performance rival to the best offerings from Stuttgart and Modena.

Power initially came from a mid-mounted Ford sourced 2.5-litre V6, with a couple of turbochargers boosting the output to 310bhp. However, new for 2003 is a twin turbo 3.0-litre V6 - replacing the 2.5-litre unit. The new M12 GTO-3 delivers 340bhp, which when allied to a kerbweight under 1000kg will equate to breathtaking performance, the 0-60mph sprint certain to better the 3.9 second time quoted for the original 2.5-litre twin-turbo version. The ride and handling will remain unchanged; it's firm but it isn't uncomfortably so, the pin sharp steering and racecar feel and look of the M12 adding to the driving experience. More models, including more track-focussed version and a roadster are due soon as is a second model line to slot in above the M12. Increased interest means Noble boasts full order books, stepping up production levels to keep up with the demand. A rare success story in an arena where so many promising projects fail Noble has built up a tremendous reputation for not just the performance of its cars, but for quality and workmanship too. With a depth of ability to impress even the most demanding of drivers the Noble is a seriously impressive sports car, one of the most exciting we've ever driven.