A replacement for the Boxster Spyder is due next year, expected to feature increased output from a six-cylinder engine 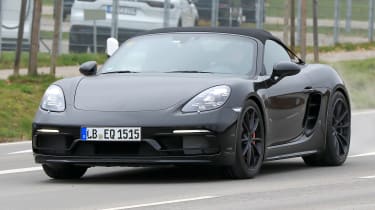 Spy shots have emerged of the new Porsche 718 Boxster Spyder under going development testing ahead of its release next year. And it’s likely to be the most powerful Boxster ever made.

The test mule is virtually undisguised, with the tell tale rear buttresses and canvas roof marking it out as the flagship Spyder. Other tweaks such as the larger alloy wheels, beefier brakes and twin centrally mounted exhausts hint at the increased performance.

Historically the Boxster Spyder has been the most potent model in the line-up and that will continue with the new version. Despite the standard 718 Boxster range being powered exclusively by four-cylinder turbocharged engines, the Spyder is expected to make use of the 4.0-litre naturally aspirated six-cylinder unit which will share with the upcoming Cayman GT4. 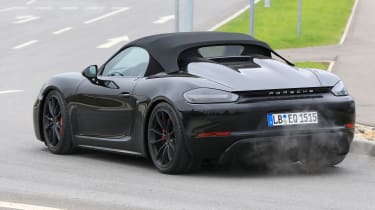 The previous Spyder was powered by a 370bhp 3.8-litre flat-six that was lifted from the 911 Carrera, but in order for Porsche to keep the Spyder naturally aspirated it will be forced to turn to its GT division.

There’s no word on power for the new Spyder, but the 4.0-litre flat-six is currently rated at 493bhp in the 911 GT3. That figure is expected to reduce in order to make sure the Boxster Spyder fits within the Porsche’s model hierarchy. It’s also likely that the model will be offered exclusively with a six-speed manual gearbox.

Other changes to the Spyder will include a stripped back cabin to help shed weight, while more performance based tyres should feature. The Spyder will also be produced in limited numbers to help preserve exclusivity.

Are you excited by the prospect of a new Porsche 718 Boxster Spyder? Tell us your thoughts below. 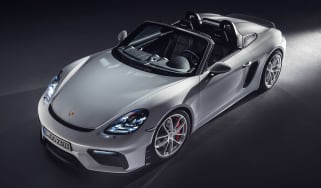 The new Porsche 718 Spyder uses the same underpinnings as the Cayman GT4, with a 4.0-litre straight-six lifted from the 911