The new four-cylinder Porsche 718 Boxster put to the test on UK roads. Is it up to the job? 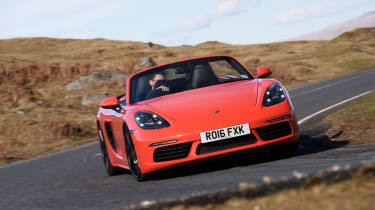 Even with only four-cylinders you can sleep safe in the knowledge that the new 718 Boxster remains at the top of its game. It’s enormously rewarding to drive, offers plenty of performance and – as a bonus – won’t have you stopping at the pumps quite so often. It may no longer be the cheapest Porsche on sale, but its as compelling an ownership proposition as it’s ever been.

The last time Porsche fitted one of its sports cars (SUVs aside) with a 2.0-litre four-cylinder engine, was in the 1970s with the 924. But 40 years down the line and history is repeating itself, with this new entry-level 718 Boxster.

Whereas the more expensive Boxster S gets a 2.5-litre version of the new turbocharged four-cylinder engine, the standard model makes do with only 2.0 litres. Technically, the two-seat roadster still carries the Boxster name – but you could spend all day gazing at it and you won’t find those seven letters sprawled anywhere on the car.

Predictably, price and performance are two other areas that separate the entry-level 718 from the S. The price saving is a hefty £8,956, but the performance penalty is only 50bhp, which means 0-62mph in 5.1 rather than 4.6 seconds and 170mph (as opposed to 177mph) flat out. 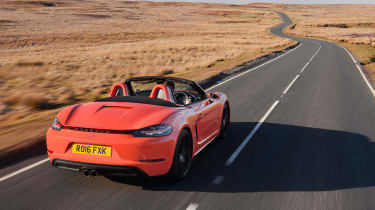 But those figures also mean the new entry-level model is quicker than the outgoing S – and it feels it. One bit of tech the basic Boxster misses out on is the clever variable-geometry turbine borrowed from the 911 Turbo, which (in theory) boosts low-end response without forfeiting top-end power.

The engine in the Boxster doesn’t really begin to wake up until 2,500rpm, whereas the S kicks a lot sooner. But once there, with the entire 380Nm of torque at your disposal, it really moves. Power delivery feels less frantic than it does in the S, but by 6,000rpm the 2.0-litre engine has served up all it’s got, despite the red line coming in 1,000rpm later.

But, surprisingly, the noise may keep some holding onto gears for longer than necessary. Out goes the wailing flat-six and in its place a more muscular burble, which augmented by the £1,530 sports exhaust, hits all the right notes. The longer you spend time with it the better is gets, too. 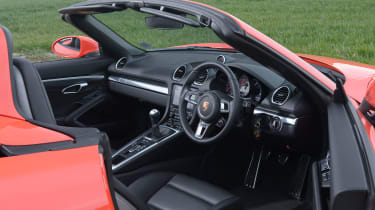 Yet, there’s more to a sportscar than simply how it sounds. How it handles and how it gets you down the road are arguably more important – and in this respect the Boxster has never been better. The faster steering lets you dive from corner to corner, while the superb chassis balance will be there to carry you through and out at the other end. You can really lean on the front axle such is the grip available, with the Boxster’s behaviour through a corner determined by how savage you are with the throttle.

It’s a car that will flatter a lot of drivers such is its forgiving nature, and its ability to glide across broken surfaces with little effort.

But extra performance isn’t the only benefit of the new turbocharged engine, as running costs have also been improved. The entry-level Boxster will return over a claimed 38mpg and emit 168g/km of CO2 – over 500 miles we return just shy of 33mpg. An updated and slicker infotainment system also makes the 718 easier to live with, while Porsche will throw in air con, part leather sport seats and Apple CarPlay as standard.