The Spanish manufacturer’s first all-electric car will carry a base-price of £19,300, and cover 161 miles between charges 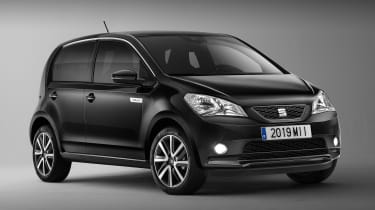 SEAT has confirmed that the new Mii electric will be priced from £19,300 in the UK, including the £3,500 government grant. It’s SEAT’s first all-electric car, which the Spanish brand hopes will entice buyers back to the A-segment with its competitive pricing.

In effect, the SEAT Mii electric is a re-skinned version of the Skoda Citigo e iV. As such, it’s powered by the same 36.8kWh battery pack which feeds a front-mounted electric motor, producing 81bhp and 212Nm of torque. Like the Skoda, the all-electric Mii has a range of 161 miles. Urban acceleration will be nippy thanks to a 0–31mph time of 3.9 seconds, while 0-62mph takes 12.3 seconds.

Charge times also match those of the Skoda Citigo e iV, with an 80 percent charge from flat taking an hour when plugged into a CCS 40kW DC fast-charger. When plugged into a domestic 7.2kW AC wall box charger, the Mii electric will recover the same level of charge in around four hours. 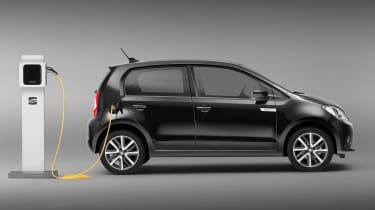 Five paint schemes are available and buyers can spec a contrasting black roof and matching black door mirrors as a no-cost option. A mode 2 charging cable is offered as a £160 extra, while a double-folding boot floor, glovebox hook and height adjustable passenger seat can be added for £50.

The Mii electric is also be the first SEAT model to be offered with SEAT CONNECT, allowing owners to view their car’s driving data, charge status and location, as well as control their car’s lights, door locks and air-conditioning from a smartphone application.

The Mii EV will shortly be joined by a fleet of additional electrified models including a production version of the el-Born concept, a plug-in hybrid version of the next-generation Leon and high performance PHEV variants of the Cupra Formentor and Cupra Leon.

Would you buy the new SEAT Mii electric? Let us know in the comments section below…