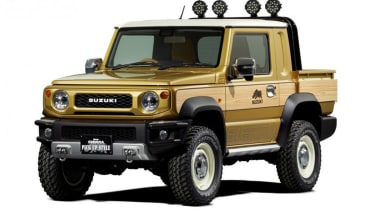 Suzuki has created a pick-up version of its small but highly loveable Jimny off-roader in a bid to snatch the limelight at the 2019 Tokyo Auto Salon that kicks off on January 11th. The Suzuki Jimny Sierra is based on the standard 5-door Jimny SUV but gets a pick-up style open load bed behind the front seats.

In line with usual diet of far-out modified cars we’re accustomed to at the Tokyo Auto Salon each year, the Jimny Sierra gets gold paintwork with wood paneling down the flanks featuring the famous Suzuki Rhino Club logo, there’s also chrome for the mirrors and the towing hitches in the aluminum lower bumper. A set of LED off-road driving lamps are mounted at roof level to complete the tough effect.

Suzuki says the Jimny Sierra pick-up is designed to appeal to people who like “DIY and other hobbies” but it’s a styling exercise rather than anything signaling a future production car. Being based on an unmodified Jimny platform that’s 3,550mm long and 1,645mm wide, the vehicle’s load carrying capacity will not be a strong point but at least that means the 102bhp 1.5-litre engine should be untroubled by the kind of cargo you can cram inside. 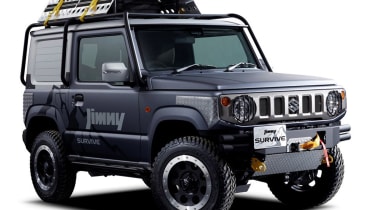 Joining the Jimny Sierra on the Suzuki stand at the Tokyo Auto Salon will be the Jimny Survive, an even more focused off-road van model with full external caging around the cabin, a super-aggressive redesigned bumper and a range of extra off-road protection including bars covering the headlights and sections of steel plate on the corners. Both concepts are fitted with Bridgestone Dueler off-road tyres.

What do you think of Suzuki’s hardcore Jimny concepts? Let us know in the comments section below… 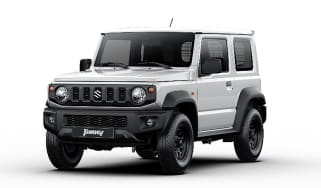